Best back to lead Ulster for daunting trip to the RDS 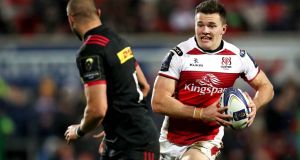 Jason Stockdale: expected to be included on the Ulster side to face Leinster at the RDS. Photograph: Bryan Keane/Inpho

In what few reckon will be anything other than a now traditionally unpleasant trip to the RDS, Ulster will at least be heading south on Saturday with Rory Best making a timely return from injury.

The Ireland skipper has been sidelined since the beginning of last month (when he was involved in Ulster’s drawn game at the Dragons ) with an ankle infection but is now reportedly good to go which will give the 35-year-old some essential game time in what will be only his fourth outing for the northern province in this campaign.

Fellow Ireland front-liners Iain Henderson and Jacob Stockdale will also be on board as Ulster begin to ramp things up for their pivotal European clash with La Rochelle at the Kingspan Stadium on Saturday week.

Centre Darren Cave looks on target to get another run-out after impressing against Munster and should line out along with Best and Andrew Trimble, meaning that Kiss will have three players with over 200 caps to deploy for the side’s most daunting-looking interprovincial.

Second row Kieran Treadwell is a doubt due to injury while Chris Henry is ruled out and Jared Payne remains on the missing list.

Playing Leinster in Dublin has been a graveyard for Ulster ambitions with just the one regulation season victory since the turn of the century and Les Kiss – still not out of the woods despite the drama of the New Year’s Day comeback triumph over Munster – will need a hugely improved effort from his squad to convince anyone that a corner might just have been turned.

There was little sign of that in Monday’s first half against Munster, where Kiss’s pack were shunted around the Kingspan and bullied in just about every aspect of play and Leinster will doubtless be reckoning that they can put Ulster’s set-piece under similar strain.

That Ulster recovered from trailing 17-0 was admirable but a significant contribution to their recovery was the loss of key Munster forwards to injury and a yellow and red card leaving the visitors short of personnel for the last 25 minutes – they had 13 men on the field at for around eight minutes – when the game, unsurprisingly, opened up to the home side’s advantage.

Ulster’s scrum coach Aaron Dundon has certainly not been having it easy of late – their scrum only stabilised after replacing both starting props at half-time on Monday – and the former Leinster player has laid it on the line to the squad in general over what must be seen this weekend.

“We’ve got to turn up,” said Dundon who came to Belfast this season from Grenoble and who, along with Jono Gibbes and Dwayne Peel, has formed a new coaching ticket under Kiss

“We need a response from the players,” he said and at least some of the side will have tasted victory in Dublin from the visit in March 2013.

“We have to go down to the RDS with aggression. We have to want to play, go at them and bring that physicality that has been missing for the last game and a half,” Dundon added with a nod to the dreadful pre-Christmas thumping handed out at Connacht.

“We’ve got to turn up otherwise it’s going to be another poor result. I would say looking at our last two games, they will back themselves to win it, and rightly so. Hopefully we’ll go down there with a bit of bite and a bit of purpose and with 23 guys who want to play.”