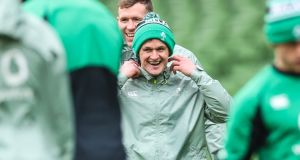 After two defeats in their first two games of the 2021 Six Nations, Andy Farrell has named the same squad for the match against Italy. File photograph: Inpho

Underlining the need for a first win in the 2021 Six Nations after the narrow defeats by Wales and France, Andy Farrell has named an unchanged and predictable 36-man squad for the forthcoming game against Italy in Rome next Saturday.

The only alterations from the original squad named at the outset of the tournament sees late call-ups Ed Byrne, Ryan Baird and Jack Conan retained, while the injured Quinn Roux and Caelan Doris, as well as the suspended Peter O’Mahony are absent.

There were “no significant injury concerns” for the 12 players who were released back to their provinces and featured in the quartet of Irish wins in the Pro14 according to an IRFU statement confirming the names of those selected.

The Ireland squad of 36 players will reassemble on Monday morning at the IRFU High Performance Centre at the Sport Ireland Campus in west Dublin before flying to Italy to take on Franco Smith’s team at the Stadio Olimpico on Saturday afternoon.

The game will be aired live on Virgin (Republic Of Ireland) and ITV (Northern Ireland) next Saturday, with a kick off time of 2.15pm Irish time.