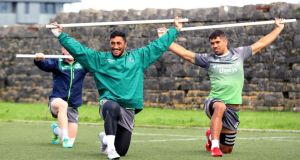 Paul Boyle is used to confounding convention. He shrugged off any physical issues in playing number eight for Lansdowne in Division 1A as a teenager, was an impressive leader by deed when captaining the Ireland Under-20 team in the Six Nations and Junior World Cup, and so it comes as no surprise that now, at age 21, he has made such an impressive beginning to the season with Connacht.

He started the previous two matches for the province in the Guinness Pro14 this season, despite his academy status, vindicating Connacht coach Andy Friend’s decision to promote him. Two tries against Zebre the last day ensures that the law student who started his rugby in Gorey as a seven-year-old, has been retained for a tricky game against Edinburgh.

Kieran Marmion starts while his fellow Ireland international Bundee Aki, is named among the replacements. Friend admitted: “He [Marmion] is a real quality player and it is great to have him in our starting team after getting an extra break following Ireland’s tour to Australia. The other big addition is to have Bundee back. He is raring to go. We face a big challenge in Murrayfield and no doubt Edinburgh will be hurting after the loss last weekend; it’s another massive challenge for us.”

The Scottish side get to play at home for the first time this season having lost narrowly in Swansea (17-13, Ospreys) and Belfast (30-29, Ulster). Coach Richard Cockerill makes three changes to the side with flanker Hamish Watson, wing Duhan van der Merwe and centre James Johnstone all coming into the starting XV.

Edinburgh have improved hugely under Cockerill, who has made them formidable opposition especially in the Scottish capital. This represents an early benchmarking test for the Irish province, who have largely carried their impressive pre-season form into the Pro14 and could easily have won both their matches.