Andrew Deegan to start for Connacht against Cardiff 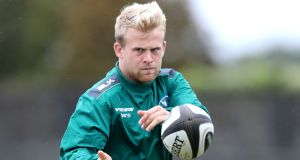 Connacht’s Andrew Deegan during training ahead of their Pro14 clash with Cardiff Blues at the Sportsground. Photo: Bryan Keane/Inpho

Outhalf Andrew Deegan is set to make his debut for Connacht against winless Cardiff Blues in their Guinness Pro14 clash on Saturday at 3.15pm.

Deegan signed for Connacht from Australian side the NSW Warathas ahead of the new season and joined up with the squad two weeks ago. He is among a host of changes from the side that started the defeat away to the Dragons a week ago.

Deegan forms a half back pairing with Irish international Kieran Marmion who returns to the starting XV after coming off the bench against the Dragons. The side includes two other players making their first starts of the season. Dave Heffernan comes in as hooker and Craig Ronaldson forms up a centre partnership with Bundee Aki.

Back in the front five are Ireland internationals Ultan Dillane and Quinn Roux while Jarrad Butler is included in the back row for his third start of the season. Ahead of the clash with Cardiff, Butler spoke of the style of play that new head coach Kieran Keane is trying to instil in the squad.

“There is a big emphasis on players taking ownership for what they do in the game and taking responsibility for what we do on the field. Obviously, KK wants to play an attacking exciting brand of rugby and that is a great environment for us to play in,” Butler said.