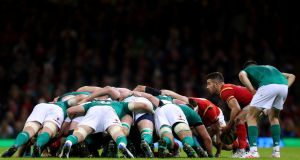 Rhys Webb and Conor Murray in action for Wales and Ireland during the Six Nations. Photograph: James Crombie/INPHO

An intriguing subplot to the Munster-Ospreys Pro12 semi-final at Thomond Park on Saturday week is the duel at scrumhalf. Conor Murray and Rhys Webb have had outstanding campaigns for province/region and country, and eight days after this latest meeting they will begin the process of becoming Lions squad mates-come-rivals in New Zealand.

This clash will hardly decide the choice of starting number nine in the first Test in Auckland. Most likely, form on tour will over-rule all other considerations. That Murray has an established partnership with Johnny Sexton may or may not be a factor, as might Webb’s even more established one with Dan Biggar or, for that matter, his experience of working with Warren Gatland and Rob Howley.

Not that Webb, a cheeky chappie on and off the pitch, sees it that way.

“No, not really. Conor’s been there, done it before, hasn’t he? He’s been a Lion before, so I’m kinda the underdog, I suppose. I’m looking forward to it. I love the challenge. I’m not just going to go there and give him a pat on the back and wish him all the best for the Test match. I’m going to go there to push him. We’ve these games coming up first, but it starts from day one in the camp.”

As specialists in their position, scrumhalves form a curious club of competitors-come-squad mates. In a squad environment, they build a bond as well as a rivalry.

In tragic circumstances, the third scrumhalf chosen on the Lions tour, Ben Youngs, has had to withdraw from the squad on Sunday after his club, Leicester, announced on their website that the wife of Youngs’ brother Tom, who is also a Leicester player, is suffering from terminal cancer, and he has been replaced by Greig Laidlaw.

“It’s obviously terrible news and I have total respect for Ben,” said Webb. “I sent him a message yesterday. Like Gats always says, family comes first and I wish Tom and Ben all the best. I know Ben quite well through rugby and stuff. It’s very sad and with the family, it’s a sad time.”

Webb confirmed that their hugely influential captain, and another Lion, Alun-Wyn Jones will be back for the semi-final, as might Brian Mujati, Sam Davies and Ashley Beck, albeit Dan Biggar is a fresh doubt. And like most fellow Ospreys, Webb seems to enjoy playing Ireland and Munster, not least at Thomond Park.

No scrumhalf around converts a higher ratio of snipes into breaks or tries, an ability he attributes to his natural inclinations and the influence of Justin Marshall, Mike Phillips and Kahn Fotuali’I at the Ospreys.

Munster will be imploring each other to get Rhys. In three clashes against Ireland and Murray, Webb has three wins, the latest when creating both George North tries at the Millennium Stadium in a game where Murray suffered the nerve injury which sidelined him for seven weeks.

Since being on the losing side against Munster three times in the 2010-11 season, when Munster won a Thomond semi-final by 18-11, Webb has been on the winning side five times out of six against Munster, and touched down in five of them. There were match-winning tries at Thomond Park and at the Liberty Stadium in the 2011-12 season, before scoring again in their 45-10 semi-final win at home, when Murray also played.

Man of the match

There was another Webb try in the Ospreys 30-15 win in Swansea the following season, and two seasons ago he was man of the match in their 19-14 win at Thomond Park, before scoring yet again at the same venue in their 21-18 semi-final defeat; a game which saw Murray depart after 16 minutes with the leg injury which ruled him out of the final.

Even then, the TMO ruled out what would have been a match-winning Josh Matavesi try, due to Webb fumbling at the base.

“Yeah, a cheeky try disallowed in the last couple of seconds, very unlucky,” he recalled smiling. “But we know it’s going to be a completely different challenge this year. Munster’s season has been up and down with the loss of Anthony Foley, obviously, but he certainly drives them on and he’s still with them and they’re playing some great rugby. They’ve showed that challenging in Europe and top of the Pro12 as it stands, so it’s going to be a tough challenge but an exciting challenge.”

He didn’t sound remotely fazed, and understandably so.