Pat Lam hopes for one last effort from Connacht 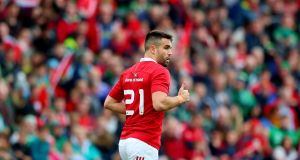 Almost a year has passed since Pat Lam orchestrated Connacht’s glorious Pro12 final victory, but that now feels a lifetime ago after their latest collapse – a seven-try, error-strewn defeat at Thomond Park.

The defence of their title finished as it began, with a whimper and a 36-point defeat – Glasgow beat them 41-5 in round one – but since Lam announced his intention to leave the province last December there has been a steady decline in the team’s performance.

Lam has often cited his team’s lack of internationals and the province’s smaller budget that its competitors, but last season the hunger, passion and skills displayed by his players overcame those deficiencies. In reality their win over Ulster last October was probably the last time they’ve managed to repeat those highs of Murrayfield last May in the competition.

But they have one last chance to send their head coach off to Bristol with a pat on the back. Either Northampton or Gloucester will be the opposition in the Champions Cup playoff semi-final – if Gloucester win the Challenge Cup final next Friday they will host Connacht. A win there will set up a Sportsground playoff final and a final shot at the Champions Cup. Anything less would be unacceptable in Lam’s eyes.

“It’s important, it’s our minimum goal. For me it would disappointing if we don’t make it through [to the Champions Cup],” admitted Lam.

“It’s because we are good enough to make it through. It highlights that for whatever reason that we haven’t been good enough this year. We have to go up another level again obviously.

“John Muldoon said that in there, that he’d been in teams that might not have had the same quality of player, but there was a lot of fight.

“It’s easy to say there’s no fight when you lose by 50, but we’ve got to give some credit to Munster. they’re on a good roll. Obviously there’s the quality of the bench, but the guys who started did really well as a team. We didn’t match that with the quality of our work.”

As poorly as Connacht performed, an understrength Munster made them look worse with a typically ruthless performance. The win saw them finish top and earned them a home semi-final against Ospreys, while an uneventful return to action for Conor Murray is a relief for Erasmus and Lions coach Warren Gatland alike.

But it was all a little too easy for Munster. A huge defensive hole allowed Keith Earls score their first try after eight minutes, a couple more line-breaks saw Jack O’Donoghue power over 20 minutes later, before Andrew Conway’s remarkable finish in the corner put Munster 24-0 up at the interval.

There was some reaction from Connacht as Cian Kelleher and Naulia Dawai scored tries, but the errors were just as frequent at the other end – Connacht missed 30 tackles in a shocking defensive display – and the home side scored four more tries at their ease.

This has been a hugely positive season on the field for Munster. A largely second string team excelled in an inter-pro derby to add to the plethora of talented, in-form players that are available to face Ospreys. All Erasmus needs is some silverware to mark their development.

“Ospreys will be tough. They’re a really, really well drilled team. They play a lot like Connacht, attacking from everywhere and they’ve got really great finishers in their team,” said Erasmus.

“And honestly, even if it was Scarlets I would be just as nervous. I’m nervous for the semis. I’m always nervous but either of them would have been a tough team. We’ve got a tough challenge.”