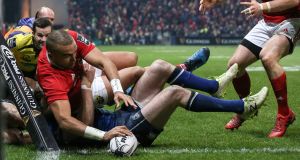 Simon Zebo acrobatically touches down for a try against Leinster at Thomond Park. Photograph: Inpho 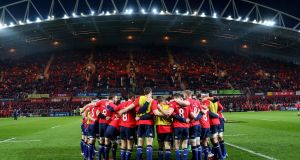 Munster made a huge statement regarding their rediscovered quality and strength-in-depth in front of a record 26,200 crowd at their Limerick fortress, which also re-found its voice.

A compelling performance yielded a bonus point win and in denying Leinster one, they opened up a five point gap at the top of the Pro12 table.

That they won was no surprise given the selection strategies of these two protagonists, with Munster altogether closer to a first-team selection. Accordingly, they just had too much pack power for a willing Leinster side, who defended stoutly and looked a well coached unit.

The Munster maul proved a potent weapon and in addition to CJ Stander, their South African lock Jean Kleyn gave their forward play a real hard edge, with Tommy O’Donnell more of a cutting edge.

They also had a cool hand on the tiller in Conor Murray, who excelled in an all-round performance, and Tyler Bleyendaal. As well as some stardust from the back via Simon Zebo, who was always searching for work and set the ball rolling with his 49th minute try.

The trend was set virtually from the start. Munster getting quickly onto the front foot courtesy of a line-out steal and going through the phases after Bleyendaal’s cross-kick forced a flailing knock-on by Zane Kirchner - preventing Darren Sweetnam from gathering - and bordered on a penalty.

But Leinster’s defence was robust and impenetrable, Rory Scannell not even finding space for an attempted grubber, and soon Ross Byrne was putting Leinster in Munster territory with the length and accuracy of his kicking.

After a good charge by Jack Conan, they also came close to opening Munster with a strike move when Byrne passed forward to Kirchner. There was some nice handling by Leinster’s big rumblers and it was no great surprise when they struck off a scrum with a set move.

Conan and Jamison Gibson-Park ran infield, using the decoy runs of his midfield as Byrne skip passed to Kirchner. Again the South African full-back took a good line, albeit he was indebted to Ronan O’Mahony who slipped as he sped off to again score at this venue. Nacewa converted.

Munster were put back onto the front foot though when Sweetnam tackled Barry Daly after the latter gathered Bleyendaal’s cross-kick and O’Donnell poached for a penalty. Munster went to the corner and rumbled, and Bleyendaal was held up inches short, before Murray’s blindside skip pass saw the touchline-hugging Zebo tame Gibson-Park’s hit and twist over Daly’s tackle to dot down adroitly by the corner flag for his fourth try of the season for Munster. Extending his Munster record to 49 tries.

Bleyendaal followed up with a touchline conversion which went over via the upright. Isa Nacewa, as ever setting the defensive tone, then followed up with a big hit before he kicked Leinster back in front after a neck roll by Jean Kleyn on Tadhg Furlong.

The visitors’ 10-7 lead coming to the half-hour mark was probably a fair reflection of the game, but at this juncture Munster upped the intensity as if with a switch, and thus as of old. Also true to type, after a big turnover hit by Jaco Taute, the inspiration for this was a couple of rumbling mauls by the pack.

The ensuing multiple phases of Munster carrying and recycling had to be seen to be believed, and likewise Leinster’s unstinting, remarkable defence.

The 40 minute mark had well passed when Murray and Bleyendaal went wide to the right, the latter’s lovely skip pass reaching Ronan O’Mahony who went hard and low to also finish by the right corner flag.

Kirchener ought to have seen yellow for his off the ball rib-tickler on Sweetman - which also ended the winger’s game - but Nigel Owens adjudged he was committed to the tackle, before Bleyendaal again converted from the touchline with the last kick of the half.

Considering they’d had 75 per cent of the possession and territory, (and made 11 carries to 30) a 14-10 lead at least rewarded their efforts.

Nor was there any let up upon the resumption, Andrew Conway won a Bleyendaal up-and-under with a towering take above Nacewa. Murray showed his class by gathering and quickly locating space wide left by running crossfield and linking with Beleyendaal, who gave O’Donnell a gallop up the touchline.

Again Munster pounded the Leinster line, Robbie Henshaw literally putting his body on the line to keep it intact. Playing with a penalty advantage, and having instigated it all with his counter-attack, Murray cross-kicked perfectly for O’Donnell to take a juggling catch above Daly and touch down despite Kirchener’s presence. Again Bleyendaal converted from the right touchline.

Going for the jugular, Munster went to the corner after Henshaw came around the side of the ruck illegally. When the initial drive was held up from Stander’s take, the Munster forwards regrouped and inched around the blindside, Stander plunging for the line and the bonus point.

Bleyendaal missed his conversion from the left touchline this time but added a penalty before the home front-row also had the immense satisfaction of helping to shunt Leinster off their own scrum ball - just before the two front-rows were replaced, and Francis Saili was introduced for his first game of the season.

The damage might have been greater, after a break and pass by Zebo released Saili and O’Mahony was almost in before being hauled down by Kirchner. Instead, Richardt Strauss peeled off an unguarded side of a maul from their first attacking set-piece of the half, Nacewa converting.