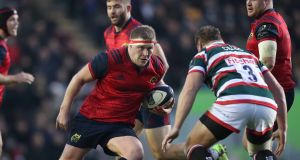 Prop John Ryan, in action against Leicester at Welford Road, won his first cap for Ireland against Canada in November. Photograph: Billy Stickland/Inpho

John Ryan hasn’t exactly been an overnight sensation. But at 28, Ryan is enjoying something of a breakthrough season. Finally establishing himself as Munster’s first-choice tighthead for the first time? Box ticked. Winning his first cap for Ireland? Box ticked.

Six seasons after Ryan made his debut, Monday’s sell-out with Leinster could mark his 12th start of this campaign, already equalling his previous high of two seasons ago. “It’s been,” he says, “a pretty crazy season.”

The reason is fairly straightforward. After years shifting back and forth between loosehead and tighthead, Ryan has become a specialist in the latter.

“It’s a massive feather in your cap to play on both sides but at the same time that can make you a handyman in a squad. Up until this season I was third choice on both sides of the scrum. But when you can focus on one position, you’re going to develop faster, and that’s what’s happened. I know it’s later rather than a few seasons ago but better late than never.”

Ryan has had plenty of mentors along the way, starting with John Hayes and Marcus Horan, Wian du Preez and BJ Botha. “I copied BJ’s scrummaging technique a bit,” Ryan admits with a wry smile. “Basically, he’s kind of a high scrummager who scrummages down, and I felt it suited me. He scrummaged more with his chest than his shoulders.”

Ironically, Ryan initially cut his teeth at schools level with CBC as a loosehead, with his current rival for the Munster number three jersey, Stephen Archer, at tighthead. They lost to Pres in the semis in 2006, and in the final in ’07 when Simon Zebo scored the winning try.

“He regularly tells me it was the greatest try he ever scored. It’s probably his favourite try ever, and he’s scored a few.”

Hailing from Inniscarra, a GAA, and specifically hurling, stronghold, Ryan’s uncle, Thomas, played for Cork, while his dad, William senior, and brother William played for the county’s under-21s and minors, the latter rejecting entreaties from Anthony Foley to play rugby. His brother, a blindside flanker-cum-number eight who won a Munster Schools Senior Cup with Christians, then played two years with Rotherham and is now with newly promoted Ealing Trailfinders in the English Championship.

Ryan is the fourth youngest of seven, after Nora, who lives in Boston, Katherine, who works with Spin and 98FM in Dublin, and Deirdre, a nurse in Dublin. Then there’s Tom, who’s at home farming, William junior and Michael, who’s in college. All will be hosted by William senior and mum Kate on the family dairy farm in Berrings, about 15km from Cork city, for Christmas, and all will be at Thomond Park.

“I’m the biggest in the family,” admits Ryan in his easy-going, humorous way. “I’m the most rotund, put it that way.”

He was also the first to start playing rugby with the Muskerry club at the age of 10. He went on to play under-19s and 20s with Munster, but was released from their sub-academy and forgot about his Munster ambitions for a while. “But Conor Twomey and Gary Byrne, our strength and conditioning coaches in UCC, said to me ‘we think you could have a cut off professional rugby’.”

Then Jeff Gomez, UCC’s head of strength and conditioning, took over. “Jeff got me in serious shape. He’s a French dude. He’s a legend. He trains across all sporting codes. He took me aside, had me running and doing weights every day. He got me strong and improved my footwork. I definitely wouldn’t be playing with Munster but for that summer [2010].”

Such was his ensuing form with UCC that by January 2011 he was called in to the Munster squad. After a year’s development contract for the 2011-12 season, Ryan was upgraded to a full contract for the 2012-13 season. He began it with a three-week loan at London Irish, making a couple of bright appearances off the bench against Gloucester and Wasps. He wanted to stay, but Rob Penney wanted him back at Munster.

“I’d loved to have stayed and played a good few games, because I came back to Munster in late September and I didn’t play a game until the following February. It was all A games.”

The following season was better. Ryan made 16 appearances, mostly at tighthead, but early on illness struck. Since 2011 he has had ulcerative colitis, a long-term condition that results in inflammation of the colon, and it flared up in October 2014.

“It knocked me out. I can barely remember the three or four weeks.” He was in bed for a month, and went from 116kg to 108kg. After six weeks out, he returned to training, but both Kilcoyne and James Cronin were injured.

“I hadn’t run. I hadn’t done anything. I barely knew the calls, but Axel said: ‘John, you’re starting.’ Cardiff away, against Adam Jones! You could say I held my own but I did not feel strong. There was one scrum he [Jones] got me on.”

Since December 2014 he has been on the correct medication and has “been perfect since. I have to get infusions every two months to make sure there’s the right balance in my colon and that I’m getting the right probiotics into me.”

Kilcoyne and Cronin returned for the home defeat to Clermont, but both were injured, so Ryan started his first European game the following week in the Stade Marcel Michelin, when Munster scraped a bonus point in a 26-19 defeat.

“It went well though and it was a good old day out. For the first 15 minutes the ball never left the bloody pitch. We tried to kick it out, but couldn’t get it into the stands. They’d just take a quick one and run us around the place. I survived the 80 anyway.”

He would play 20 games that season and, back at tighthead mostly, another 25 last season, albeit 16 from the bench when Archer returned from injury. He admits he didn’t agree with Foley about that.

“No player and coach look eye to eye the whole time. Obviously we had fall-outs because I was dropped from big games, but when he passed away you sat down and thought “Christ, he was a bit of a legend, wasn’t he?’ It was very tough when it happened. When we heard the news we just sat down in a hotel room for four hours, waiting. Nobody budged. It was just numbness.

Munster did Foley proud against Glasgow and enjoyed a seven-game winning run before last week’s defeat in Leicester. “What we said we’d do is play the way he wanted us to play, and that’s all we’ve done. We haven’t changed that much, we’ve just been more accurate. He used to say ‘just be clinical’ and that’s what we’ve done.”

Ryan’s Irish debut came off the bench against Canada, three weeks after the Glasgow game. “If someone had said to me last June that I was going to be making my debut in November I’d have laughed at them. It wasn’t a case of not being confident, it was just I didn’t see how it was going to happen no matter how well I did.”

Being called on after a warm-up seven minutes into the second half was ideal. No time to think. “And to make it better again, the first bit of action was a scrum.”

He’d also been in Chicago the week before as 24th man, doing some video work on the scrums, and so was beside the coaching staff at full-time. “They just went mental, and rightly so too. To be honest, we all went pretty mental. Even to be a member of the squad was an incredible experience.”

Being a late developer and a prop, these should now be the good years. “That’s the plan, try to keep the other guys out and get into a Six Nations squad. That’s my next goal. I’m not really thinking beyond that, other than getting into the knockout stages in Europe for the first time in three years.”

There’s also the minor matter of hosting Leinster on Monday.

“That’s going to hinder our eating on Christmas Day but I can’t wait, because we did not turn up in the Aviva the last day. They also did a double on us last year, so we need to step up a bit. If we want to keep filling that place out we need to put in a good performance.”

Better late than never, it’s upwards and onwards for Ryan.