Old rivals Munster and Leinster not inclined to do dull 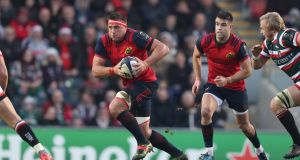 Live on Sky Sports and TG4.

The biggest and best rivalry the league has known since they met, fittingly, in the inaugural final of 2001/’02 is back.

Just as appropriately, they meet as first v second in a Pro12 summit meeting, in front of a record Thomond Park attendance swelled by returning ex-pats and, in front of the cameras, Nigel Owens is in charge.

As ever, Munster and Leinster are not inclined to do dull.

Including that final of December 2001 at the old Lansdowne Road, they have met 32 times competitively, with Leinster 18-12 ahead in league meetings along with a European Cup semi-final win apiece.

They arrive here with eight wins each out of 10 in the Pro12 this season, separated only by points difference, and going altogether better in Europe than was the case at this juncture a year ago, when their European goose, as well as their turkey, had been well cooked.

Although Leinster are not entirely locked and fully loaded, they will travel with belief. They have lost nine times at Thomond Park, but their win here in the corresponding fixture last Christmas – the last time Munster lost in the league at Thomond Park – was their fifth here, which gives them a better record than most.

Ostensibly obliged to rest up their Irish frontliners for one of the two derbies, as expected all the provinces feel obliged to put their best foot forward for what promises to be four sell-outs.

That said they have not kept them all back, and so Tadhg Furlong and Robbie Henshaw start on Monday, and despite making 10 changes, it is a measure of their unrivalled strength in depth that they can still field a backrow of Rhys Ruddock, Dan Leavy and Jack Conan, with Dominic Ryan in reserve.

For their part, Munster start Simon Zebo, Conor Murray, Donnacha Ryan, Peter O’Mahony and CJ Stander, all of whom are likely to miss the trip to Galway on New Year’s Eve as Rassie Erasmus makes just three changes to the team that started both European Champions Cup games against Leicester.

Prop James Cronin, lock Jean Kleyn and winger Ronan O’Mahony all come into the team, while All Blacks centre Francis Saili is in line for his long-awaited seasonal re-appearance following his rehabilitation from a shoulder operation at the end of last season.

Typical of the tight margins between them, there is no apparent advantage with regard to place kicking. Tyler Bleyendaal (57 points) and Isa Nacewa (64) come into this fixture among the top scorers in the league, while they boast near identical kicking percentages – Bleyendaal has an 83 per cent success rate and Nacewa’s is 84 per cent.

Whereas Nacewa’s status in Leinster and Irish rugby has long been established, and which he has been re-affirming with another vintage campaign, injuries have held Bleyendaal back until this season.

He is now finally physical strong and well enough to showcase the abilities which Anthony Foley always touted.

He’s also been in the Irish firmament long enough to appreciate the magnitude of this fixture.

“Yeh, it is special,” says Bleyendaal. “You draw the calendar out and everyone looks at the Leinster matches home and away and we’re lucky to have the home one on Stephen’s Day and in front of 26,000 people it will be amazing. We are really looking forward to getting out there. We got past last weekend on Tuesday and then it was stuck into training and the exciting challenge that Leinster will pose.”

Since Foley’s passing, Munster have rediscovered their Thomond Park spirit of old. Last week’s flawed performance at Welford Road was their first defeat since that tragic day in October, but while it has ended their winning momentum, the chance for redemption against Leinster, of all teams, is possibly ideal.

Leinster have still assembled a strong side, but it looks comparatively callow for an occasion that will be light years removed from their back-to-back meetings with Northampton.

Munster’s apparent set-piece efficiency, mauling power, and perhaps most importantly of all, breakdown presence, along with a cutting edge and possibly more impact off the bench, gives them a stronger, more rounded look.

They’re also at home, have the whiff of vengeance in their nostrils after losing the last three meetings, and after last week’s first taste of defeat since their relatively limp defeat at the Aviva Stadium in early October, will be acutely conscious of the need to maintain their rediscovered Thomond Park X factor.