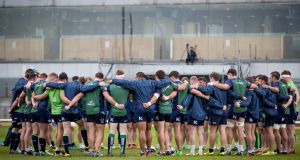 Connacht face the biggest game in their history against Glasgow on Saturday. Photograph: Inpho

Pat Lam has made just one change to his side for Saturday’s Pro 12 semi-final against Glasgow Warriors at the Sportsground.

Last time out Connacht beat the defending champions 14-7 in Galway to secure second place in the table and a home semi-final, and Lam has retained faith in 14 of his starting line-up.

Eoin McKeon is the one new face and he comes into the backrow alongside captain John Muldoon and Jake Heenan.

Ahead of the game, which is arguably the biggest in Connacht’s history, Lam said: “We are under no illusions when it comes to the challenge we face against the defending champions Glasgow who are stacked with players with plenty of experience of test match and knock out rugby.

“ We know they will be much stronger than they were two weeks ago but if we channel our physicality and the excitement into our game, we will be able to meet that challenge head on.

“It’s an exciting time for everyone involved in Connacht Rugby as we head into our first ever PRO12 semi-final. The reason we’ve had such a good record at home this season is the special atmosphere generated by our supporters and we’re all looking to give them another special day to remember in our last home game of the season.”

Connacht make seven changes as they seek to extend winning run 06:00
Carbery’s return the major subplot as Munster visit Cardiff 06:00
Ireland will be looking for that clinical edge in Rome, says Farrell 06:00
Jacob Stockdale to be unleashed as Ulster target win over Ospreys 06:00
Six Nations miscellany: Jonathan Davies can provide the glue for Wales 06:00
Here is your handy guide to sport on television this week