Munster’s gritty away win not enough for Rassie Erasmus

‘It was actually a dreadful performance because of the weather, but we were gutsy’ 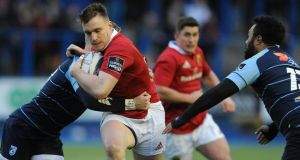 Another gritty away win failed to please Munster director of rugby Rassie Erasmus despite his team’s 23-13 success over Cardiff Blues.

The result in the Welsh capital keeps Munster third in the Guinness Pro12 table behind leaders Leinster and second-placed Ospreys. But Erasmus is nothing short of a perfectionist, with the South African challenging his team to improve further in the weeks ahead.

Munster remain in the hunt for a domestic and European double as the season enters its pivotal stage.

“It was not a good performance. It was actually a dreadful performance because of the weather, but we were gutsy,” Erasmus said.

“Relieved is the word to describe it. It was a see-saw game and with the conditions it could have gone either way. But the guys showed a lot of composure and I’m happy with the win.

“I was nervous all the time, even when we were 10 points ahead late on and we had a kick charged down. It was probably not one of our best performances, but emotionally and belief-wise it was a great display.”

Munster had to rely on a late salvo to return home with the win as they scored 10 points in the final four minutes. With the game tied at 13-13 and seemingly heading for a draw, Rory Scannell stepped up with a nerveless drop goal to put his team ahead. Conor Oliver then put the icing on the cake with a late converted try as the replacement forward picked and went from a ruck.

As he travelled back to Ireland, Erasmus would have reflected further on a resilient team performance which saw Scannell produce a starring role. The 23-year-old played three quarters of the game at out-half after moving inside from centre and replacing the injured Ian Keatley.

The transition to general failed to bother him, though, as despite a couple of missed shots at goal he orchestrated Munster’s backs in impressive fashion. His drop goal summed up his display and it was fitting Scannell had the game’s last laugh as he converted Oliver’s try.

“The most important thing was that Rory tried the drop goal,” Erasmus said.

“He’s put in two this year with one against Ulster as well, but we might start practicing those because I didn’t think the flight on that ball was too great!”

A tight game had seen Munster 6-3 down at the break, Steven Shingler booting two penalties for the Blues to one from Scannell. With a stiff breeze in their favour in the second half, Munster made the most of conditions as Francis Saili, who had replaced Keatley, waltzed through to respond to a try from home wing Aled Summerhill.

Scannell and Shingler booted the rest of the points to make it 13-13 before Munster’s late show won them the game. Erasmus can now watch his side rest and recuperate on a week off before they travel to Italian strugglers Zebre a week on Saturday. It’s a game from which they should take maximum points.

“The next seven or eight weeks are going to be nerve-wracking,” Erasmus said.

“All the top teams in the league are playing each other and at this stage of the season we’re trying to stay in both competitions. By doing that we have to experiment and rotate with a couple of younger guys. While we’re doing that we’ll win some games and lose others.

“We’ve got a few bumps and bruises. We’ll assess those in the next few days, but we have an important game coming up which is a quarter-final so some guys will get an opportunity in that.