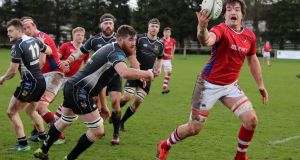 Garryowen were the big losers in Ulster Bank League Division 1A over the weekend, falling from fifth to eighth place courtesy of a 19-3 defeat at Dublin University.

Only seven points now cover the bottom six sides in the table, so Trinity’s second win in three games was just the ticket as they climbed into seventh overall.

Munster’s Sam Arnold played for an hour but he had little opportunity to make an impact for the Light Blues, with the students dominating second-half possession and number eight Tom Ryan’s pushover try in the 73rd minute sealing the result.

Leinster lock Ian Nagle was among the try scorers as St Mary’s College deservedly won the ‘Battle of Dublin 6W’, prevailing 20-13 at home to Terenure College.

Terry Kennedy and Nagle both touched down before half-time and influential outhalf Dave Fanagan ran in a third try in the 53rd minute. Late tries from replacements Stephen O’Neill and Conor Weakliam secured a losing bonus point for second-from-bottom Terenure.

Leinster prop Andrew Porter scored a crucial try for UCD as they overturned a half-time deficit to defeat second-placed Young Munster 20-13 at the Belfield Bowl.

Forwards Brian Hayes and Luke Cahill both crossed the whitewash as Cork Constitution edged out bottom side Old Belvedere in a hard-fought 16-10 triumph at Temple Hill. Only two points separate Munsters (44 points), Con (43) and Clontarf (42) in the top four, with Lansdowne still six points clear at the summit.

Second-placed UL Bohemians, who trail Buccs by a full 16 points, got back to winning ways courtesy of a 30-23 success at Ballymena. Backs Harry Fleming, Robbie Bourke and Colin Ryan had a try each for UL.

Converted efforts from Aidan Moynihan and Adam Griggs saw Galwegians and Old Wesley share the spoils (7-7) at Crowley Park, while player-coach Tom Hayes and Munster’s Duncan Casey were part of Shannon’s pack in their 20-14 home win over UCC. Current Ireland Under-20 international Conor Fitzgerald kicked 10 points for the Limerick men.