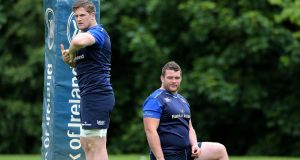 The most memorable end-of-season run-in to the many faces and reincarnations of the Guinness Pro12 has thrown up a unique, mouth-watering all-Irish climax. Admittedly, at face value it also looks like the most lopsided final of all, but every dog has its day and in something of an underdogs’ year nothing seems predictable any more.

Where Leinster are proven trophy hunters, Connacht’s cupboard is comparatively bare. Whereas Leinster are league kingpins with four titles to go with their four European crowns, and are contesting their seventh final, Connacht had previously never finished higher than seventh and are competing in their first final of any description.

Cometh the knockout stages, as is their wont, Leinster found a level of intensity and accuracy last weekend that all but blew Ulster away at the outset of each half in the RDS.

All the high achievers delivered, be it Jack McGrath, Devin Toner and Jamie Heaslip, or Eoin Reddan and Johnny Sexton at half-back, and Isa Nacewa.

Their defensive line speed, impact in the collisions and ruthless efficiency at the breakdown bore all the hallmarks of a high-quality side.

Accordingly, there are even fears that a reproduction of that form could result in the mother of all anti-climaxes.

Connacht are on a palpable roll, are machine-like in adhering to the Pat Lam processes and have consistently risen to the occasion and more as the season has built to a climax.

Their win over Munster was an even more emphatic statement of what they have become than the win over Leinster; and ditto the second win over Glasgow – in the more rarefied air of a semi-final – was more convincing than the first.

Leinster, historically and recently, have always been a better fit for them than Ulster and likewise the flawed decision to have this final in Murrayfield appears more suitable for them than the Aviva or the RDS would have been.

Their players know Murrayfield, through league meetings with Edinburgh, better than the Aviva, while they have an abysmal record in the RDS, where they produced their worst performance of the season. The favourable forecast and the presence of Nigel Owens should also suit them, as well as the occasion.

Leinster might, it is true, have the more potent scrum, even if their endgame play for a three-pointer when losing in the Sportsground was given short shrift by Owens. But for Connacht, Tom McCartney’s darts and the marshalling of Aly Muldowney has made for a well-oiled lineout, and they have more confidence in their running game, width and counter-attacking; they have better strike moves and heretofore a sharper cutting edge.

On top of which, the loss of Toner and Nacewa has deprived Leinster of their primary ball-winner and sharpest finisher.

All three of Leinster’s starting outside three are going to South Africa, whereas none of Connacht’s trio are, yet while the Matt Healy, Tiernan O’Halloran and Niyi Adeolokun are all in razor-sharp form and have 19 league tries from a combined tally of 55 games this season, Rob and Dave Kearney, along with Luke Fitzgerald, have scored two from 23 combined starts.

Connacht have more than a puncher’s chance.

So often though in these big knockout games the better defensive team wins out. True, Connacht’s voracious defensive work-rate has intensified in latter weeks, but one ventures Kurt McQuilkin will have his defence well primed.

Most of all perhaps, though, there is Sexton. Judging by the way he masterfully orchestrated proceedings in the semi-final – whether attacking the gainline, doing his wraparounds or launching moves – or sitting back in the pocket and turning the screw, he is in prime form. And he doesn’t look like missing off the ‘t’.

But if Connacht are still in this game going into the last quarter, it could be very interesting indeed. If Leinster are a big-game team with any amount of proven players, insatiable Connacht will want this every bit as much.