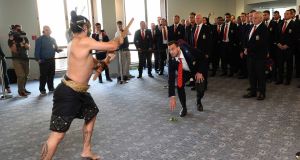 Sam Warbuton is quite the wise old head for a 28-year-old. He was the Welsh captain as long ago as 2011 for the World Cup in New Zealand, and returned here last summer as the Welsh captain for the their three-test tour, while in between times captained the Lions four years ago in Australia.

Hence, Warburton has a good feel for what is coming hard down the tracks and at full steam, so while the Lions have often kicked off a tour with a big win against a composite side, the tourists’ captain is setting no such targets in advance of Saturday’s opener against a Provincial Barbarians team in Whangarei.

“Just win, I don’t care how we win. If we won every game 3-0 I’d bite your arm off. It’s all about winning at this level. Obviously it’s nice from a spectator’s point of view, for fans and yourselves, that it would be a great spectacle, which hopefully it is, they’re better games to play in, but I’d take a win all day long.”

That said, Warburton is on message as usual with his coach Warren Gatland in agreeing that the results of the tests are paramount, and that a defeat here or there along the way would not be catastrophic.

Asked if he would you take a loss to win the tests, Warburton didn’t blink an eye. “One hundred per cent, yeah. It’s all about the Test series. These games, they are important to win them. From four years ago you do get a good feeling in the camp when you do win games, but we’ve got to realise that the next three, four weeks are going to be big learning weeks for us, getting combinations together, from a forwards’ point of view getting our processes right at line-out time and scrum time, which is going to take a little while to develop.

“Some of the guys playing next week will have their first hit-out against one of the best club sides in the world,” said Warburton in reference to the ensuing Wednesday and Saturday games against the Auckland Blues and unbeaten Crusaders.

“There’ll be a lot of learning in the next three or four weeks. Ideally we’d love to win all those games but as long as we just get better and better after each fixture that’s the main thing.”

That said, winning on Saturday would set a positive tone.

“That’s obviously really important, a winning style is more important than a losing style, and it’s much easier in training after a win. We’ve all gone through losses and all bounced back from them so it wouldn’t be the end of the world, but the number-one priority is to win.”

Regarding the hugely ceremonial welcome which the Lions received as soon as they disembarked from their plane earlier that day, Warburton said:

“That was great. As soon as we hit the ground we got welcomed. One of the things I’ve always found about New Zealand is how friendly and welcoming the people are when we get here, which is probably why it’s my favourite place to play rugby in the world, outside of my home country. So, a great start to the tour.”

As for his own squad’s rendition of the Welsh hymn Calon Lan, Warburton said: “If you’re not Welsh it’s extremely hard to learn those words. The boys have had to learn a lot of calls and moves, but they all put their heads in their notes and learned the Welsh lyrics for us, which is quite difficult.

“There’s only, I think, about four or five natural Welsh speakers in the whole squad, but we picked a song from each country that represents Ireland, England, Scotland and Wales. We did a couple at the farewell dinner on Sunday, the Scottish and the Irish songs, so it was the Welsh turn this morning, and I was really pleased with how that went.”

Warburton also said jet lag would not be an excuse for any shortcomings on Saturday, and pointed out that with an 11-month-old child he’s had more sleep in the last three nights than much of the last year.

In response to Steve Hansen’s claims that there was nothing to prevent the bulk of the Lions squad travelling over last week than arriving en bloc three days before the first match, strictly speaking, team manager John Spencer didn’t refute that point.

“The schedule is set by the NZRU, and that’s a contractual thing and has been for many years,” said Spencer. “We don’t mind the schedule at all. It would be a pointless exercise coming to New Zealand to play the best team in the world, and trying to play them having played mediocre opposition.

“So the fact that we’re playing Super Rugby sides is exactly what the coaches want, to prepare sides for the Test. The only thing we’re disappointed in on the domestic side is the preparation time, we’re trying to fit six weeks’ preparation into a couple of weeks with only part of our squad. So that aspect is disappointing, but that’s our lot, that’s what we have to react to.”