Dan Biggar welcomes chance to learn from Sexton and Farrell 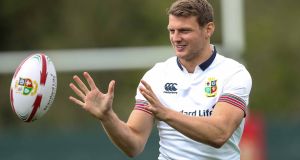 Dan Biggar: “The most important thing is not the battle for places but that we do everything on and off the field and back whoever is playing in all the games.” Photograph: Billy Stickland/Inpho

One of the major bonuses from a Lions perspective last weekend was to have all three of their outhalves in camp. Johnny Sexton and Owen Farrell know each other well from the tour four years ago, whereas Dan Biggar is the newer ‘10’ on the bloc.

No less than others in specialist positions such as hooker and scrum-half, the three outhalves have to work together, adopting and applying the game plan while stepping in and out of training sessions and matches seamlessly. And yet they are also rivals, vying for the same jersey, and each has a feisty, competitive and unusually physical approach to outhalf play.

For Biggar, it has already been a novel and fascinating experience working with Sexton and Farrell.

“What I have found interesting is the amount you pick up off them, and that goes for other players as well. We have chats after training and talk about tactics. The two have so much knowledge and it is really interesting. Johnny and I have got on really well and after playing so often against him, it is good to be on the same side.

“I am looking forward to challenging him and Owen and being with them gives you a good perspective on 10 play. We are not holding anything back from each other; the greater aim is to win the Test series so if any of us has any knowledge that can help the team win games from small detail, it is important we put it out there.

“We are all confident characters who are not afraid to speak our minds and say what we think. That will suit the team well. We are competing for the same position and we all want to play in that ‘10’ shirt. But the most important thing is not the battle for places but that we do everything on and off the field and back whoever is playing in all the games because we have the chance to achieve something historic.”

As critical toward that, in Biggar’s view, is gelling off the pitch as well as on it. He singles out Ben Te’o and Kyle Sinckler as two of the squad’s characters.

“Players like that are important when you are away from home for six weeks. Then there are the likes of me who keep themselves to themselves and let the other guys take a bit of banter and stick.”

To that end, Biggar says there was plenty of interaction last week in breaking down national barriers.

“I made the decision when coming down to breakfast that I did not want to be with players from my club or country because a tour like this is about getting on with guys you did not think you would get on with; you find out they are really good blokes and you get on well. That is really important and almost as useful as what we have done on the field.

“So far it has been good and no one has upset anyone. There is a way you approach players you do not know. On the field, you want your 10 to have a bit of authority and then confidence to push you around the field rather than do it softly-softly and when it comes to putting your foot down you are not taken as firmly as you would like.

“You have to find your way in and learn who can take a little bit more, a kick up the backside or something softer, and for the three of us it is about driving standards and leading them team around the pitch whoever is playing. For those of us who aren’t, it is about backing the guy up and helping out as much as we can.”

The weekend’s Super Rugby results continued to underline the utter dominance of the New Zealand sides and noting this Biggar said: “It will be a huge task for us, and not just the three Tests. The games against the Super teams will be hugely important as well. They seem to have a conveyor belt of talent: they lose Carter and they have Barrett and Cruden. The challenge is going to be huge in the Test series and there will be no greater one in your career. We all have the opportunity to paint ourselves in a really good light.”

Biggar also knows he, Sexton and Farrell will be targeted more than most to which, not surprisingly, he has a bring-it-on attitude.

“As a ‘10’, teams try to target you, putting big runners down your channel. They see you as a weak link, and my attitude is that I like that. I work hard and do not mind putting it about a bit. I look to turn what teams see as a strength for them into a weakness. I enjoy a game when it is tight and physical and you have to muscle up a bit. All three ‘10s’ in the squad are good defensively and I hope there are no weak areas.”

“The balls we will be using are a bit different to the ones in the Pro 12 but they are brilliant,” said Biggar.

“They travel a little bit further and I would like to have them week in week out. There are a few goal-kickers in the squad and Leigh [Halfpenny] is still to come and put more pressure on. Stuart Hogg was winding them up from 60 metres in training today and goal-kicking is a strength of ours with the number of kickers we have.”