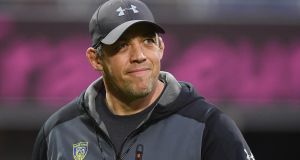 Former New Zealand player Jono Gibbes, who declined an extension to his contract as forwards coach with Leinster in 2014, and also recently with Clermont, will coach Ulster next season.

Currently the forwards coach at ASM Clermont Auvergne, Gibbes has agreed a two-year contract as the province’s head coach.

The former All Black, who spent six years working in Dublin, turned down an extension to his contract with Leinster in order to broaden his coaching experience in France.

Gibbes will bring personal ambition to the job in Ulster as he seeks to turn the province from a competitive team into one that can take the extra step towards silverware.

Gibbes was with Leinster for three of their Heineken Cup wins. The 40-year-old also helped Clermont to the Top 14 and Champions Cup finals in his debut season after joining them in 2014. But his role with Ulster under director of rugby Les Kiss is a new departure.

“I think a lot of Jono’s thinking is about broadening his role. I know that Clermont offered him a further contract extension to be in line with Franck [Azema],” said former Irish scrumhalf and current Leinster manager Guy Easterby. “It was announced today [Monday] that he [Azema] is through to 2020, so I think Jono looked at that, and that would have left him 11 years as an assistant coach.

“We offered him a new contract here, but he took the decision to move to France, where he couldn’t speak the language. Move a family there. That was a brave decision because he could have stayed and we would have been very happy with him.

“He took an ambitious decision and one that has probably been proven to be the right decision. He’s put himself in difficult positions, made himself uncomfortable, and grown through that. I think Ulster will definitely benefit not just from his time here but those years in Clermont too.”

A direct, no-nonsense talker, Gibbes will come into his new role before the beginning of next season. His familiarity with Ulster as well as a respect for Les Kiss helped influence the decision. Gibbes would also have had some contact with Kiss when the two lived in Dublin at the same time, Kiss then being involved in the Irish set-up.

“Jonno will be very clear in what he wants to achieve there,” added Easterby. “I don’t think the players will be under any illusions about what they need to deliver.

“He’s an ambitious coach. He’s obviously got the head coach job, and that is what he wanted. He was never happy sitting in one place. He always wanted to move on.

“The opportunity to affect the way the team plays is something that was hugely exciting for him. Also working with Les, who he got to know when they were both working in Dublin as a person and a rugby mind, would have been very central to his thinking.”