Ireland and the All Blacks through the years: Barry McCann’s kick put into perspective in 1973 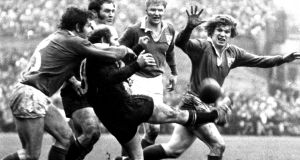 ew Zealand scrum-half Sid Going gets in his kick despite the attentions of Sean Lynch and Fergus Slattery (Ireland), watched by Ian Kirkpatrick (New Zealand) and Terry Moore (Ireland) during the 1973 clash at Lansdowne Road. Photo: Dermot O’Shea/The Irish Times

A breakthrough of sorts but by Monday, nobody was talking about the game. For the first time ever, an Irish rugby team had avoided defeat against New Zealand. And for a few intoxicating seconds, as Barry McGann’s nerveless, last minute conversion of a famous Tom Grace try sailed through the dank afternoon, the prospect of a debut victory descended on Lansdowne.

But: a gust of wind, the ball tailing a vital inch or two astray and the game finishes in a draw. The real world intruded again. And it was only sport. During the game, a bomb had exploded, at 3.20pm, in Sackville Place near O’Connell Street. Tommy Douglas, a young bus conductor was killed. Tommy was Scottish: his mother was from Achill Island. He’d been in the city for just a few months and became another victim of an appalling, benighted time.

“Hopefully those days are behind us,” says Wallace McMasters, who lined out in Ireland’s dashing back line alongside fellow Ulster man Mike Gibson that day.

“Some of the teams didn’t turn up in those years. Wasn’t it the English captain at the after dinner speech and said that we may not be a very good team but at least always turn up?”

It was. John Pullin, the redoubtable farmer from Aust in Gloucestershire. In ‘72, both Wales and Scotland had declined to travel to Dublin for the Five Nations matches, citing threats from paramilitaries. Pullin’s England travelled and were duly beaten. In January ‘73, New Zealand’s rugby players were, of course, aware that they were arriving on a fractured little island. But a further 43 years would pass before it emerged that an official IRA letter had been sent to Bob Burgess, the All Blacks first five-eighth, detailing that while they would do their best to ensure the safety of the touring party, they couldn’t vouch for the intentions of the ‘Provos’.

Burgess passed the letter on to journalists Lynn McConnell and Tony Johnson for their book Behind the Silver Fern.

“We will take steps to try and ensure your safety as we do not trust the Provos (our Black September group),” it read. “No such immunity can be extended to any British team. So we can assure you that it was with good reason that the Scots and Welsh did not come here. By way of advice, we suggest that you should refrain from talking about politics.”

In November ‘72, during the first weeks of their tour, the tourists had visited Belfast to play Ulster. “We trained at Ballymena, north of Belfast and it was snowing,” Burgess told the authors. “God, it was cold, snow on the ground and the British military forces were all armed with machine guns which they happily showed us.” At Ravenhill, they got a hugely warm sustained ovation: it was clear their presence meant a lot. “There was an uneasy feeling that what we were doing was political and that we were being used other than for it just being a game of football.”

By 1973, Ireland’s long record of losing to New Zealand was inescapable.

“That fact made us try the harder,” says McMasters.

“We had a good side around then. We had won the championship and we knew each other’s play and if we were to beat New Zealand, that was the time. We had a lot of guys like Willie John and Kiernan…guys who were coming towards the end of their eras. And everyone got stuck in because it was going to be a last time for them to have this opportunity and we wanted to do everything we could to win.”

January 1973 was a significant month in Ireland: the country officially entered the EEC along with the United Kingdom in Denmark, the 5th Amendment to the constitution, deleting the ‘special position of the Catholic Church’, became law.

Beating the All-Blacks would have enhanced the sense of a country on the move. The day was windy and the Lansdowne pitch had that mid-winter heaviness. It was an era of Led Zeppelin hair-dos and duffle coats. The players from both teams looked as if they hadn’t bothered with a visit to the barbers in some time. New Zealand’s attacking game revolved around the pulsating running of Grant Batty, their winger who liked to blaze infield and the light-footed power of their scrum half, Sid Going, who emerged from a rolling maul to create a first try out of nothing.

“They were all big strong guys: south Island farmer types and guys who worked physically as well as playing their rugby,” says McMasters.

“They were all very hard and strong. They weren’t in the gym they’d be out shearing sheep and stuff. So they were naturally very strong and physical. And I have to say: there was no dirt with them. There didn’t have to because they were strong enough to manage without putting the boot in and doing anything untoward.”

The score was 10-3 late in what was a fitful, physical game when Ireland came up with a perfectly timed late burst. First, Tom Kiernan gathered a long, downfield clearance from fullback Joe Karam and, rather than return the kick, the veteran cut inside the covering tackle, dummied a hip-swerving pass and started a running move which ended with a desperate covering tackle from Alex Wylie on Mike Gibson.

The improvisation was enough to cause pandemonium in the old ground: as the players trundle up to get into formation for the lineout, you can see teenagers jumping up and down on the touchline and one lad races on to give John Moloney, the Ireland scrum half, a big clap on the back, before trotting off with his arms raised in triumph. Nobody pays a blind bit of notice: there’s hardly a steward to be seen.

You can see how cold it is from the front row of spectators: blankets across knees, fellows cupping their hands and blowing hard. Then: an infringement in the lineout. And then: a penalty from the scrum when Going is punished for not putting the ball in straight. McGann lands the penalty and now it is 10-6 and the game is up for grabs. Karam sends the restart straight into touch and from the scrum on the half way line comes one of those unannounced moments of green wizardry.

It’s nothing flashy in conception: Moloney wheels away on the blindside and flicks a pass to Tom Grace, who chips ahead. It’s the insolence that grabs you though. “This could be draw-ma” warns the BBC commentator as Grace takes off in a foot race against the All Blacks backs division. “This could be draw-ma! Can he get there? Can he get there? The ball is dead, I think.” It wasn’t. Grace dived on the ball even as half the crowd dived on him. Dozens of delighted Irish supporters had invaded the pitch by now, swamping the winger, who trotted back to his position.

It was one of the episodes of delirious bedlam, presaging Hamilton against Australia in ‘91 and Geoghegan in Twickenham in ‘94. The mood was anarchic and brilliant. The conversion task was, however, horrible: flush against the right touch line and into an unreliable, swirling Lansdowne breeze. McGann’s kick was so true that no matter how many times you watch the replay, you believe it is going over until the moment it doesn’t.

Ian Kikpatrick’s New Zealand trooped off still unvanquished and perhaps quietly relieved to be leaving a cold and troubled land behind them. They would meet four of the Irish team just a week later: McBride, Gibson, Fergus Slattery and Ray McLoughlin were on the Barbarians team that got together in the Cardiff Arms Park and concocted ‘the greatest try of all time”, a sweeping score of unquenchable flair and unconquerable sideburns that become one of the emblematic moments of the entire 1970s.

As ever, Ronnie O’Sullivan sparks debate at the Crucible 13:54
‘Historic humiliation’: Spanish press reacts to Barca drubbing 12:39
Piqué says Barcelona have hit ‘rock bottom’ and need change 08:56
Inside the world’s largest sports air dome just outside Knock 08:30
The weird and wonderful world of Memphis Depay 08:15
Crossword Get access to over 6,000 interactive crosswords