Club unhappy at having to field weakened team, after Dublin side refuses to reschedule 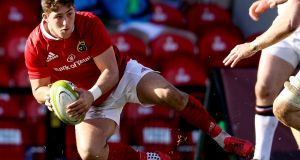 Young Munster’s Dan Goggin in action for Munster A in the British & Irish Cup quarter-final against Ulster A in Cork last month. Photograph: Tommy Dickson/Inpho

Young Munster will be without several professional players for Sunday’s Ulster Bank League semi-final against Clontarf.

Not only does the game clash with the Champions Cup semi-final between Leinster and ASM Clermont Auvergne. but the British and Irish Cup final between Munster A and Jersey Reds on Friday night in Cork means at least five contracted players will not be allowed represent their club two days later.

“There is a rule that doesn’t allow contracted players to play two games in 48 hours but we appealed that to the IRFU. There is a possibility of Coombes or Wycherley being allowed play with us, and the scrumhalf [Griesel] is not contracted to Munster, he is our player, so we could play Abrie.”

However, the South African was promoted to the Munster match day squad last weekend as Duncan Williams (groin) was rested as a precaution and Conor Murray is still injured. Griesel may provide scrumhalf cover in Dublin for Saturday’s Champions Cup semi-final against Saracens.

“As a result we are having to field a totally weakened team in the semi-finals of the league, which in our opinion and others shows a total disregard for the club game,” Collopy continued.

The IRFU said if Clontarf agreed, they would reschedule the fixture.

However, the north Dublin club refused to do so.

“It also shows a total disregard to the sponsors Ulster Bank, who would get a much higher coverage if it wasn’t clashing with so many other main rugby events on a different weekend,” said Collopy. “The IRFU fixed the match for the 23rd and then they asked Clontarf to agree to a change. Sure why would they?

“Again we are extremely disappointed at the outcome.”