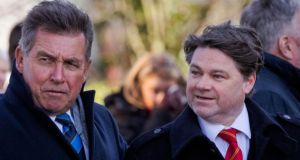 Munster chief executive Ian Flanagan believes there is “no significant fault or blame attached” to James Cronin despite the prop receiving a one-month suspension for doping.

“I’m confident that having looked at this in great detail this was just a very unfortunate third-party dispensing error,” said Flanagan of the mix-up at a Cork pharmacy that led to the Ireland international collecting medication, on Wada’s prohibited list, meant for another James Cronin.

“It literally could happen to the man in the street where a wrong prescription is dispensed.”

Cronin tested positive for prednisolone, a synthetic steroid, and prednisone, a corticosteroid, following Munster’s draw with Racing 92 at Thomond Park in November 2019.

Antony Davies, the independent judicial officer appointed by European rugby, stated the doping violation could have been avoided if Munster doctor Jamie Kearns and Cronin had put better “safeguards” in place and concluded the player “bears at least some fault”.

“Yes, [a review of doping protocols] has been done,” Flanagan told the Crooked Feed podcast. “We take doping and any issues associated with doping incredibly seriously, as does all of Irish rugby.

“I’ll also say I have a huge amount of sympathy for James in this. I think he’s been incredibly unfortunate. I personally, and several other of my colleagues, have spent a huge amount of time and hours going through all of this and being part of the process.

“We want our sport to be clean. It’s what we’re all about in terms of rugby’s core values. That’s the message we want to go out to our supporters, our clubs, and our younger players coming into the academy.

“We’re looking forward to seeing James come back and playing for Munster again.”

Cronin missed no rugby, either collective training or games, during his ban due to the coronavirus suspending all collective activities.

“We are in reasonable shape but I’ll caveat that with the financial challenges that are obviously extensive,” said Flanagan when asked about Munster general wellbeing.

“A big part of our annual revenue has stopped dead since February. We absolutely do need to be playing games in front of our supporters again.

“The IRFU revenue streams are slightly different. If and when the Italy game gets replayed in Dublin, even behind closed doors – which is the model that’s on the table at the moment – it’s still going to deliver revenue for the IRFU through broadcasting and central sponsorship deals and the overall Six Nations competition dividend.”

Ireland hope to host Italy at the Aviva stadium on October 3rd.

Flanagan, who succeeded the late Garrett Fitzgerald in October 2019, comes with a wealth of commercial expertise from time spent at Leicester City, when they won the Premier League in 2016, and in London for sports agency CSS Stellar, where he represented the England rugby team after they won the 2003 world cup.

“I’ve worked in elite sport for over two decades, always on the commercial side,” said Flanagan. “I was originally an academic, did a PhD [in philosophy] and was planning a career university lecturing but I got very bored doing that.

“Essentially my job has always been the same in some ways; my job is to understand what was going to happen in sport in the next five years and advise our company and advise our clients.

“It was about understanding what was going to happen to rugby and football rights.”