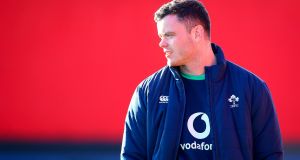 Next summer’s British and Irish Lions coach Warren Gatland has name-checked Irish secondrow James Ryan as one of the outstanding locks in these islands.

Gatland has also suggested that England powerhouse Maro Itoje, will be one of the strong candidates to take the Lions captaincy in July and August, when they take on South Africa over three Test matches.

The Lions open the Test series in Johannesburg on July 24th with the second meeting taking place in Cape Town a week later before they return to Johannesburg for the final match on August 7th.

Currently preparing the Chiefs for the new Super Rugby competition and next year taking charge of the Lions for a third time, Gatland hints about how he is thinking now about Ryan apropos the quality of secondrow players available to him for selection.

During an interview conducted with Rugby World Magazine marking their 60th anniversary, the former Galwegians, Connacht and Ireland coach was voted the best rugby union coach over the last 60 years, beating Ian Mc Geechan to the title with 53 per cent of the votes to the Scotsman’s 47 per cent.

Those in the running had to have coached at men’s international 15s level since 1960. Most were head coaches but included were also a few assistants due to their impact.

“There are some pretty good secondrows around,” says Gatland. “You have Courtney Lawes and George Kruis. How’s Alun Wyn Jones going at that time? There’s James Ryan.

“There’s no doubt about Itoje’s quality. He’s an intelligent player and an intelligent man and has been incredibly successful in his career. He would definitely be in contention as one of the possibilities as captain.”

Ryan has made huge strides since he became professional and was granted a place in Leinster’s academy for the 2016-17 season, however injury meant his opening season was badly disrupted. Given a full senior contract ahead of the 2017-18 season, despite having completed only one of the normal three academy years, the then Irish coach Joe Schmidt called Ryan up to the senior Ireland squad ahead of the 2017 Summer tour to the United States and Japan.

In the one-off Test against the United States in June of that year, Ryan made his debut for Ireland, coming off the bench and scoring a try, which put him into a small group of players including Brian O’Driscoll, who played for their country before they played for their province. He has since been an outstanding player at international level.

The votes of Rugby World readers on social media, which possibly built in a bias towards younger rather than older rugby fans, decided the winners of 31 head-to-head polls. Schmidt went out in the virtual first round when he was out-polled by Jim Telfer with Steve Hansen making it no further that round two where he was ousted by winner McGeechan.