After years of neglect, our men’s and women’s teams now ready to compete at the top flight 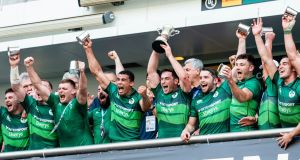 Last Sunday in Hong Kong, Ireland finally gained equality with the rest of the rugby world.

Twenty years after the World Sevens circuit was established, Ireland’s men joined our women’s team in the top flight of sevens rugby and qualified for the HSBC Sevens Rugby World Series.

It is an achievement decades overdue because of a small, but determined group of faceless amateur officials who manipulated the IRFU to all but abandon sevens rugby in Ireland.

In 1999 when the world sevens circuit was being established, the then chairman of the International Rugby Board, Vernon Pugh, described the IRB’s vision for this new sevens competition as “to set in place another important element in the IRB’s drive to establish rugby as a truly global sport, one with widespread visibility and steadily improving standards of athletic excellence”.

Two decades on and World Rugby got their Sevens grand plan spot on.

It is a lesson in long-term strategic global planning. While the 15-a-side game has a presence all over the world, for national teams to be competitive they require a strong internal competition. For many smaller rugby countries, it is not viable to sustain a multiple team 15-a-side competition.

But a fully-funded world sevens circuit, where each country only requires a travelling squad of 12 players to participate, now that was achievable.

For the IRB the key was returning rugby to the biggest sporting stage of all, the Olympic Games. Not just for the prestige but because there is an ocean of funding for Olympic sports in most countries across the globe.

Money baby! The base of all evil and the foundation of all progress.

If rugby could return to the Olympic fold it left in 1924, a tsunami of funding would flood the playing fields in non-rugby dominated countries as diverse as the US, Russia, Spain, Uruguay, Portugal, Japan and Kenya.

A delicious thought to all in rugby.

So the political courtship with the Olympic movement commenced.

The 2009 decision to return rugby to the Olympic family at the 2016 Rio games saw the global participation numbers for both the women’s and men’s sevens explode.

And why not? Sevens rugby is pure joy to play and watch.

To attend an HSBC Sevens Rugby World Series weekend is to experience a cross between a Super Bowl half-time show on steroids and the Roman Colosseum. The supporters want to sing, dance, drink and watch outrageous rugby skills. It is high-octane entertainment for eight hours a day, two days in a row.

It is not like the Six Nations. Sevens rugby is a completely different animal. It is a sport for all shapes, genetics, genders and all cultural backgrounds. The world lapped it up.

All the world that is, except for Ireland. Incomprehensibly, Irish rugby watched the planet embrace sevens rugby and was unmoved. Ireland did not participate in the world circuit and at the Sevens World Cup, the Irish teams were embarrassingly ill-prepared.

In 2009 I was still an employee of the IRFU. No matter how hard a committed group of us pushed the sevens button we got no response. Committees were set up to explore the possibilities of establishing a sevens programme . . . they formed sub-committees, who held exploratory meetings . . .

The official line was Irish rugby could not afford to compete in sevens. Scotland, Wales and Australia could afford it, and they were broke. Kenyan rugby was not exactly flush with funds and they participated. So money was the excuser, but not the real issue.

The true reasons for the IRFU’s decade-long refusal to promote sevens will never be confirmed. I know for a fact the remote possibility of Ulster players, technically being able to declare for Great Britain at an Olympics and not Ireland, as remote as this possibility was, caused concern. I know amateur officials within the IRFU mounted an internal fear campaign on this topic.

While World Rugby’s long-term policy on sevens has been an outstanding success, history will show that the IRFU policy on sevens rugby at the beginning of the 21st century will be looked upon as one of the worst policy decisions ever made in Irish rugby history.

For the governing body to not foster the playing of sevens, for both men and women is incomprehensible and unforgivable. Sadly, those responsible will never be held accountable.

The arrival of the high performance director, David Nucifora in 2014 was literally a game changer. He smashed the political stalemate and supported sevens rugby. He then appointed Anthony Eddie to oversee the program.

Nucifora and Eddie deserve great credit. Irish sevens would not be where it is today without the rugby intellect they have injected into the Irish sevens men’s and women’s programs.

Irish players can now aspire to represent Ireland sevens at both the World Series and the Olympics. That statement alone is worth the years of frustration caused by the political interferences from amateur officials, that disappointed so many in the Irish rugby community, whose only motivation was that one day, Irish teams would play international sevens.

That day has finally arrived. The good guys have finally won.

Now both our women’s and men’s sevens teams are treading the world stage and taking their place beside best in the world. A place where they have always belonged.