Head coach hasn’t ruled out the possibility of a month-long, isolation training camp 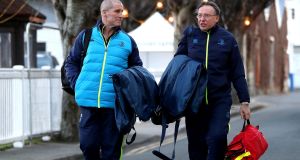 As an Everton fan, Leo Cullen can joke about the English Premier League season ending without Liverpool being declared champions for the first time in 30 years, except that he knows this would also mean Leinster’s hitherto unbeaten campaign – which had left them well poised for a dual trophy assault – also ending prematurely.

In truth though, as with Jürgen Klopp, Cullen knows there are bigger issues on the planet right now than whether or not the 2019-20 rugby season is declared null and void.

“It’s not the way we think. We are just trying to make sure that he can help the situation in any way. First and foremost, our thoughts are with our medics who are on the frontline and how we can help them out in whatever little way possible.

“We get regular updates from John Ryan,” added Cullen in reference to Leinster’s team doctor, who is head of the A&E department in St Vincent’s Hospital. “The situation is the situation. It’s going to be disappointing, but there are far bigger things out there in the world at the moment.”

In addition to Professor Ryan, Dr Stuart O’Flanagan and Dr Jim McShane also work with the Leinster team. Both are GPs and Dr McShane recently wrote about his recovery after being tested positive for Covid-19.

“We feel very lucky in terms of the care the players get ordinarily,” added Cullen, “but obviously now are thoughts are with the medics that do provide such good care on a normal day-to-day basis and the situation they now find themselves in.

“It’s hugely challenging for them – the risks they have to take on for themselves. Thanks for all health workers out there at the moment – huge credit to them for what they do. It’s an amazing time that they’re living through and they’re at the forefront of all our thoughts.

“From our end, we have just been focusing on being facilitators or enablers for the players, so that we get a good quality programme into them, so that they can maximise their full potential. That is a bigger concern. Hopefully we will get back and we will be able to complete the season. We will take it day-by-day.”

Accordingly, despite the doomsday scenario suggested by Minister for Health Simon Harris that there may be no widespread gatherings before the end of 2020, Cullen maintained that no less than the other provinces Leinster will continue to monitor players’ individual training in keeping with the IRFU’s projected return to training date of May 18th.

Cullen accepts that the cross-border nature of the Pro14 and Heineken Champions Cup adds complications, as does the nature of rugby as a contact sport.

In any event, were there to be a return to competitive action, most probably it would be behind closed doors, then Cullen admitted such a scenario would be better than nothing.

“I think playing behind closed doors, if it does come to that and revenue can be generated from that, and we get back into that rhythm of playing games, I think it would be a positive thing in the situation that we’re in.”

To that end, Cullen did not rule out the possibility of, say, a month-long, isolation training camp.

Meanwhile, on the prospect of James Lowe further swelling Leinster’s Irish contingent were internationals to be played in the autumnal window, Cullen reasoned: “We always celebrate anyone who we lose to Ireland. It’s not like we lose them. It’s kind of like you gain an international player when they come back. That would be the hope.”

If the 2019-20 season is to be completed in an abbreviated form, then it will pose particular problems for Cullen in keeping such a hugely talented squad happy.

This would be acutely so in the backrow given Jack Conan is training fully and another long-term casualty, Dan Leavy, is also running again.

“It’s always easier to have 10 than two, it’s more challenging when you only have two backrows because then it’s hard to actually field a match day squad,” Cullen said wryly.

“We know it’s going to be competitive. The competition does drive performance, definitely. Nothing quite beats it. Backrow, realistically, it’s one of the most attritional areas of the game. Traditionally, we have always found ourselves with three of four backrowers injured on the sidelines.

“It is what it is. We will see what it all looks like when we get everyone back together.”

Indeed, it would be a minor and welcome problem in the greater scheme of things.