John Ryan: ‘I’ve had to wait like no other man in the team’ 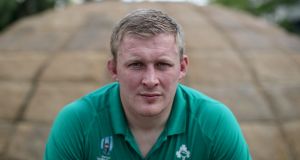 It has, he admits, been a funny old route, but John Ryan is finally about to realise a childhood dream. The 31-year-old becomes Ireland’s oldest Rugby World Cup debutant at this tournament when he starts against Russia tomorrow.

“It’s huge. It’s something you dream of. I’ve had to wait like no other man in the team, third game in and getting my first bit of the action. I’m looking forward to it now.”

His earliest memories of watching the World Cup are of 1999. He has clearer recollections from 2003 in Australia.

“England winning it was huge, the first northern hemisphere side winning and making it possible for other teams to feel like they could follow suit.

“Obviously we forget about 2007, keep that at the back of the mind,” he quips, before adding: “You probably don’t dream of being there at that age, it’s something that feels very much out of the reach. Here we are, we’re at the World Cup and we’ve a big point to prove on Thursday.”

There have been, Ryan admits, too many coaches who’ve helped him reach this point to mention them all. “Starting off, my first ever coach Ger Spillane in Muskerry, when I was 10 years old. He pulled me out of the GAA because I was just no good at it. He brought me down to the rugby, saw something in me.”

Even then, Ryan played at number eight before basically being told he was too heavy and was shunted into the frontrow.

“Going through Christians, all the coaches there - Russell Foley. And Con and UCC. There are so many, too many to mention. Obviously then you had Munster - plenty of coaches there: Tony McGahan, Rob Penney, Axel of course and Rassie. They’ve all had their own little impact on me, Johann (van Graan) recently as well. I suppose Rassie gave me my first big shot. He probably had a huge impact on me. I obviously left a few out there.”

Along the way, Ryan also studied US foreign policy in UCC. “So there was a lot of Russian stuff in that. I did a bit, more on the political side. Cold War stuff. We’ll stay away from that now. That’s a different kettle of fish.

“I did my thesis on the Irish diaspora, Ireland all over the world. There’s plenty of that there, they’re all over the place at the minute.”

Not least here in Japan, although he gets grief from Joe Schmidt, who knows more about the subject now than the Munster tighthead. Last Saturday was possibly the first example in many World Cups that Ireland didn’t have the majority of the support.

“You could hear them singing after the game and you could hear them giving the Japan lads a standing ovation when they won. We were in Kyoto yesterday and walking around there’s an incredible amount of them around. They’re very friendly and they leave you at your own thing. Other people want pictures but it’s crazy to see them around in such a fish-out-of-water scenario. But they seem to be embracing the culture anyway.”

Helpfully, Ryan will also have the familiarity of packing down in an all Munster tight five.

“Yea, having a Munster front five is pretty good now in fairness. It’s a five day turnaround but you can’t claim that you don’t have familiarity with the lads around you so that’s one excuse gone out the window. Delighted to know the fellas to my left and behind me. Again, there’s opportunities for some of those lads who haven’t been starting - an opportunity to get in for games down the line, hopefully.”

Ryan and the rest of the squad watched Scotland’s sweaty bonus point win (in every sense) on a big screen over dinner on Monday night. “Two years ago I was here and there might not have been a roof over the pitch but it was very warm. We have to deal with more humidity here now but I think we’re all more than able for it. We did our warm weather camps and our cooling strategies and all that. We’re prepared for that.”

That said, there’s only so much preparation for conditions such as the oven-like Kobe Stadium. “We essentially trained with bin bags under our jerseys just to get that uncomfortable feeling. To put it one way, it’s about being comfortable with being uncomfortable, that kind of way, so we’ve done that kind of side of things. I imagine we won’t need the bin bags on Thursday.”