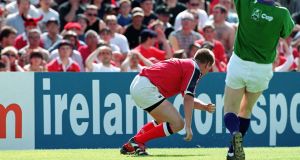 On a glorious sunny day in Bordeaux on May 6th 2000, it was 20 years ago this week, the Red Army was born. It was also the day that Munster truly announced themselves, for the first time, as a force in European rugby.

After Munster’s brilliant 31-25 win over Toulouse, inaugural European Cup winners and the multi-decorated aristocrats of French rugby, truly nothing was ever quite the same again.

“Twenty years ago?” was Mick Galwey’s response when told of the anniversary. “A beautiful sunny day like this week, and one of my favourite games of all time.”

Munster went into that season’s Heineken Cup as 66/1 outsiders. I ought to know, I backed them. In 10 previous away games in Europe, they had managed one win (in Petrarca) and one draw (in Neath). Amongst their eight defeats was a whopping 60-19 beating by Toulouse just four seasons earlier.

Recalling that day 24 years ago, the then Munster captain Mick Galwey confirms that one of his exhortations in a huddle behind the goal-line awaiting another conversion was indeed: “Let’s keep it under 50 lads.”

Yet there had been stirrings. Munster had reached the quarter-finals the year before, when Ulster won the European Cup in the absence of the English and Scottish teams. As part of an arrangement to best prepare for the 1999 World Cup, Keith Wood rejoined the province for the season and memorably stunned his Munster team mates by even daring to suggest they target winning the tournament.

Despite the disappointment of the Rugby World Cup, with that quarter-final playoff defeat by Argentina in Lens, Munster had completed an impressive six wins out of six in the home-and-away interpros, running up 242 points in the process.

Their campaign took flight after a home win over Pontypridd when Jeremy Staunton’s late try secured a stunning 35-34 win - from 21-9 down at the break - over a star-studded Saracens team featuring Francois Pienaar, Thierry Lacroix and others in Vicarage Road.

That first win in England was backed up by a first in France when avenging the bitter and bad-tempered quarter-final defeat away to Colomiers the previous season with a 31-15 win in Stade Selery as the first half of back-to-back wins.

A 31-30 victory over Saracens at Thomond Park, this time secured by Wood burrowing over and Ronan O’Gara’s conversion in off the upright, secured a home quarter-final when Wood drove Diego Dominguez demented and Munster ran out 27-10 winners.

Munster drew the short straw with a semi-final away to Toulouse, with Northampton and Llanelli meeting in the other semi-final. “No-one wanted Toulouse away,” admits Galwey.

Come the day the temperature in Bordeaux was in the high 30s, which was compounded by the humidity.

“I think it was 36 degrees but in fairness to Declan Kidney, we had everything worked out,” says Galwey. “Not alone were we taking on water but we were using sprays and wet towels and ice packs.”

The Stade Chaban Delmas was a relatively old, exposed concrete bowl in those days, and ill-equipped to protect the then 28,000 capacity, including an unprecedented invasion of roughly 4-6,000 Munster fans were bedecked in red.

“Back then it was nearly like you knew all the supporters by name,” says Galwey, “but that was when we noticed them coming from Brussels and Paris and from all over Europe. We had a new travelling support. There was a good crew there.”

But, initially, the Red Army could hardly be heard above the pre-match din created by the Toulouse supporters clad in black and red.

Long before the warm-ups, never mind the kick-offs, the Chaban Delmas was rocking in the heat. Save for the press box, there wasn’t a neutral to be seen. The former English lock turned rugby writer, Paul Ackford, stood up, soaked it in and just nodded approvingly. This was already going to be special.

Conditions seemed ill-equipped for the visiting team too, but in a clever pre-match ploy, Galwey brought his team into the in-goal area populated exclusively by hardcore Toulouse fans for the Munster warm-up.

“I remember talking to Declan Kidney about it and he had a saying ‘let’s get the party out of way in the warm-up’ because they were going mad. It was crazy. We also warmed-up in our runners, which we’d never done, because the ground was rock hard and taking in fluids and keeping the body temperature down was huge.”

Munster’s running, ball-in-hand, offloading brand of rugby contradicted the notion that they could only stick it up their jumpers. They drew first blood when spreading turnover ball inside their own half for Wood to make a 40 metre break.

Tackled five metres short of the line, John Hayes took a breather and after the play went right and left, two phases later Hayes stood up to take Dominic Crotty’s offload and plunder the first try. One of just four by The Bull in 212 games for Munster.

“What I loved about that try was that their scrumhalf tried to tackle Bull and usually a fellow tries to protect himself but I don’t think Hayes even saw him. He just fell over him,” says Galwey laughing.

“Going through the video the following Monday, we counted the amount of time Hayes was on the ground. We reckoned it was 17 seconds. The fact that it was 20 years ago, the number should be getting higher, not lower!”

There is a 200 metre or so walk through a courtyard to the dressing-rooms in the Stade Chaban Delmas, and to Munster’s surprise, the Toulouse players didn’t go back, and were instead slouched on the ground in the tunnel.

“That showed us straight away a sign of weakness,” says Galwey. “I remember coming out and stepping over them, and I suppose you’d call it sledging nowadays, but I remember telling them that they were f****d. We were too, but they were showing it. These were the little psychological things you picked up over the years.”

Wood, after his barnstorming first half, didn’t return but Frankie Sheahan acquitted himself fine. Just past the hour - off a good Munster scrum just outside their 22 when trailing 18-17 - O’Gara’s skip pass hit Mike Mullins. Back after 10 minutes in the bin for a deliberate knock on which assuredly denied Toulouse seven points, and he worked a switch with Crotty.

After he offloaded to Holland, Kelly popped the ball off the deck and Anthony Foley charged into the Toulouse half. A blur of passes, offloads and changes of angles followed, featuring just two rucks, and with Anthony Horgan beating three men on the outside, culminated in Crotty freeing his hands to put the supporting O’Gara over under the posts. The sheer tempo of the attack left the Toulouse defence in shreds.

“We used to do all these drills and it was always keeping the ball alive,” says Galwey. “Our game was an offloading game. That was it. In fact we didn’t want to go to ground, we wanted to keep it alive the whole time and that’s when the gaps came.

“That was the natural ability that we all had and if you go back to the manual all the time you lose those natural abilities. I think a lot of that stuff was very natural to us.”

Now the ground echoed to the strains of The Fields of Athenry and two minutes later Holland picked off Jérme Cazalbou’s to make it 31-17 and despite a late try by Jérme Cazalbou, Munster deservedly reached their first final.

“I think there was only Dominic Crotty, Anthony Foley and myself from four years before and that’s what made it better. That proved we were doing something right. Four years before they were more physical than us, they were fitter and more skillful and four years we later we were able to tick all those boxes to beat them.”

It also has to be said that the Toulouse supporters all applauded the Munster players. Soon after the game a phone was passed to Galwey. It was the actor Richard Harris calling from Mexico. “There are some great photos as we went around the ground, including one of Moss Keane and his wife, Lord rest them, in the crowd. Then coming off the pitch some fella said: ‘Richard is on the phone?’ I was thinking ‘who the hell is Richard?’

“We knew him as Dickie Harris. So I took the phone, he congratulated me and asked could he come to the final. I said of course he could. ‘I’d love to be there,’ he said. ‘You’re very welcome,’ I said.”

“So on the day of the final he comes into the dressing-room after we’ve lost to Northampton and I didn’t know he’d become a bad luck symbol for Young Munster. He went to all their finals they’d lost every one of them. So Claw (Peter Clohessy) sees him and says: ‘What the f*** are you doing here?’ As if he wasn’t feeling bad enough.”

Indeed, three weeks after the semi-final, a storm hit Twickenham and despite the Red Army swelling to an estimated 40,000, Munster were beaten 9-8 by Northampton. (Yep, at 66/1, not an easy report to write!)

And so began Munster’s magnificent obsession as well, but 20 years on, this semi-final certainly ranks as a vintage Bordeaux win.