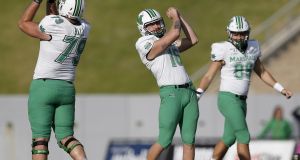 Justin Rohrwasser has some worrying artwork on his left arm. Photograph: Getty Images

With the 159th pick in last month’s NFL Draft, the New England Patriots selected Justin Rohrwasser, a kicker out of Marshall University.

Many were surprised by the choice, ESPN didn’t even have footage of his college career to hand, but Rohrwasser comes with a decent pedigree. Reliable in bad weather, he handles pressure situations well and boasts a left arm emblazoned with rather interesting ink.

One of his more prominent tattoos is the Roman numeral III surrounded by 13 stars, a symbol associated with the Three Percenters, a right-wing militia with ties to white nationalism.

Almost as soon as the Patriots announced their pick, social media was ablaze with close-ups of Rohrwasser’s forearm, accompanied by explanations of the Three Percenters. A lot of people had never heard of the extremists, turns out almost everybody knows their work.

Among other debacles, they provided security for the white nationalist tiki-torch rally about the Confederate statue in Charlottesville, were to the forefront of protests against resettling Muslim refugees in Idaho, and participated in an anti-government stand-off on a Nevada ranch that became an alt-right cause celebre. Toy soldiers, have real guns, will travel.

“The Three Percenters, formed in late 2008, are a loosely organised movement centred around an obscure, and not particularly accurate, Revolutionary War ‘statistic’ that claimed that only three per cent of the American population during the Revolutionary War participated as combatants in the war,” according to the Anti-Defamation League. “The group asserts that they are a modern counterpart to the mythical three per cent of American Revolutionary-era patriots and also represent the three percent of American gun owners ‘who will not disarm’.”

Borrowing from the playbook used by seemingly every athlete who ever tested positive for steroids, Rohrwasser immediately feigned ignorance and blamed the folly of youth for the symbol ending up so proudly displayed on his arm. At 18, newly arrived in college, somebody apparently told the neophyte from upstate New York the myth of the Revolutionary War and he reckoned the art work might be a fitting tribute to those in his family who have served in the American military.

“As soon as I saw what it was linked to, it was exactly the time I knew I had to get it totally taken off my body,” said Rohrwasser, doing damage control last week. “I said I’d cover it up to reporters, but I want to get it removed from my body. It’s shameful that I had it on there ignorantly.”

For reasons too obvious and depressing, the arrival of Barack Obama in the White House spawned an upsurge in right-wing extremism. The normalisation of hate culture over the past decade has suckered in plenty impressionable American teens seduced by the lure of an especially virulent patriotism that is invariably pro-gun, anti-immigrant and often laced with racism. The problem with Rohrwasser’s obliviousness defence is that the kicker’s social media accounts, since hastily scrubbed and restricted, were pockmarked with rancid conspiracy theories beloved of that demographic.

His digital footprint included retweeting people mocking the victims of school shootings, promoting those questioning the severity of the Coronavirus, and parroting various Ayn Rand fanboy tropes, exactly the type of guff that fits the chem-trail chasing profile of your average AR-15-wielding Three Percenter. Of course, his defenders contend all of this proves nothing except he is a MAGA hat-wearing, Trump-supporting conservative who once bought a tattoo he didn’t understand and is now being unfairly pilloried for it by the liberal mainstream media.

That’s about as credible as the Three Percenters claiming they didn’t know there would be neo-Nazis marching in Charlottesville. And then there’s the small matter of Rohrwasser having other ink complementing the Roman III. Just beneath it, he has a very large “Liberty or Death” tattoo, an historic slogan from one of the Founding Fathers of the US that also happens to be sold as a bumper sticker and clothing patch on the Three Percenters’ website. He is also 23 so this has been on his arm for five years now, a turbulent period during which the Three Percenters have gained national media attention like never before. Yet, we are somehow supposed to accept it’s taken being drafted into a league where 70 per cent of players are African-American to figure out what the symbol represents.

Before selecting any college stand-out, NFL teams conduct exhaustive background research. In a lengthy audition process, they conduct one-on-one interviews with prospects that include posing seriously invasive questions about sexual preferences and lifestyle choices. Infamously, Dez Bryant was asked by the Miami Dolphins whether his mother was a prostitute. Against that background, it seems far-fetched that the New England Patriots and their legendary forensic coach Bill Belichick (a devout Trumper) opted for Rohrwasser without doing due diligence.

“I did a psychological test with them and that stood out to me because I think that kicking, a lot of it is mental,” said Rohrwasser. “The fact that they were looking into that and what my mental makeup was, and Coach Achord (the Patriots’ special teams’ coach) came to my pro day and got to watch me in person, have a conversation with me that morning - I think they put a lot of attention to who the player is as a person to figure out what kind of guy they’re getting.”

Perhaps they were too busy looking at his legs to notice his arms. Perhaps.