IRFU faces €10m loss if rugby does not resume this year 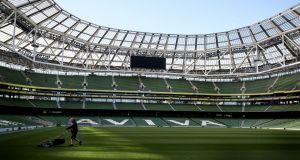 The potential cost to the IRFU were international rugby not to return before the end of the calendar year, thus ruling out the November Tests against Australia, South Africa and Japan, could be in excess of €10 million.

The coronavirus pandemic has crystallised how the professional game survives on a hand-to-mouth existence and all unions are desperately hoping that Test rugby – the game’s financial driver by some distance – returns in 2020.

With the July tours certain to be called off, the return of Test rugby could be in a number of ways, be it the Rugby Championship in the southern hemisphere followed by relocating the summer tours to an October window in the northern hemisphere and then the various November Tests. Alternatively, the latter could be replaced by a home and away Six Nations.

From an Irish perspective, first and foremost, the IRFU need the postponed 2020 Six Nations game against Italy at the Aviva Stadium to take place in the autumn. Were that not to happen, the estimated losses of €7-10 million which the union is already believed to have incurred, would be swollen by the €2-3 million in gate receipts alone from a home Six Nations game.

Were the other 2020 Six Nations games -–France-Ireland, Wales-Scotland and Italy-England – also declared null and void, the IRFU and the other federations and unions would miss out on a sizeable chunk of broadcasting money.

However, all this would be compounded by the loss of around €5-7 million in TV revenue were the November games to be called off. Even if they went ahead behind closed doors, it would still be a huge hit, of around the same figure, in lost gate receipts.

The prospect of both Test rugby and professional competitions such as the Pro 14 (or a revived interprovincial championship) remaining behind closed doors until a vaccine for the Covid-19 virus is made widely available remains a possibility but is not cast in stone.

Finding a vaccine and making it widely available, according to most medical advice, could take 12 to 18 months, but the document regularly stresses that this report is “fluid” and can be updated at regular intervals pending new national government directives.

The World Rugby document states: “The practical operations of any stadium hosting matches will depend to a significant extent on whether spectators are permitted to attend or not.” It adds that on foot of public gatherings, social distancing and travel restrictions all being further relaxed “to allow gatherings of 500 or more people a Union, Club and competition may be able to discuss limited crowd attendance with government and local public health authorities”.

“Large traditional crowds are unlikely in the absence of an effective and freely available vaccine for Covid-19. This section is written assuming that matches will initially be held ‘behind closed doors’. No crowds will be permitted and minimal staff will travel with playing squads.”

This certainly suggests that the days of a capacity 50,000 crowd at the Aviva Stadium or an 80,000 sell-out in Twickenham will most likely not be returning any time soon, albeit the option of playing games behind closed doors is a distinct possibility.

But limited crowd sizes, as well as virtually empty stadiums, remain options. Potentially offsetting the losses incurred by this, televised sport could also become more valuable. For example, the Six Nations might have additional bargaining power in selling an end-of-year tournament or a revised, 10-match home-and-away tournament held over the end of the year and early next year.

All stakeholders in the game are planning for every eventuality, with forecasts as to what the short-term future may hold, never mind the longer-term, changing by the week, never mind the month.

Short of a vaccine being found and being made widely available, the report outlines what measures might be employed, but all the while based on government guidelines.

As for playing games behind closed doors, the World Rugby report, outlines that the minimum number of people required to host a game would be 167, which includes two playing squads, medical and operational staff, and broadcasters. However, the report also states that “the risk of infection and outbreak could be further reduced if broadcast and television staff (where present) are isolated from players and non-playing staff”.

The report’s graded ‘return to match play’ runs parallel to the reduction in governments’ easing restrictions on public gatherings, social distancing and travel.

“When social distancing has been reduced to allow close contact and public gatherings of up to 250 people, match play is possible, but spectators will not be permitted to attend.”

On foot of this, the World Rugby document states if a union has successfully staged local games, as in an interprovincial games in Ireland, and there was a further easing of government restrictions, then “limited overseas travel for games may be discussed with government and local health authorities, competitions, receiving Unions and player representatives.

“Practically, the teams of both countries would need to have relaxed border control measures to allow proposed visiting teams and players to enter – requiring reduction in border and quarantine restrictions.

Meanwhile, the IRFU has welcomed the Government’s Roadmap for Reopening Society & Business which was issued last Friday as “a huge step towards the reopening of our clubs and we will be working to fully understand the details of this plan with our friends and colleagues in Sport Ireland and the Department of Transport, Tourism and Sport.

“We will bring these learnings to the plans we have been working on to reopen, on a phased basis in line with government frameworks. Public safety and adherence to public health measures are at the heart of this plan. The IRFU will reach out to clubs when this planning process is complete.”