Irish fans in Japan discover unexpected links with their hosts

Ireland scrum coach Greg Feek said the Pool A favourites are under no illusions that they face a tough challenge up front when they face Japan in their second World Cup fixture. Video: Reuters 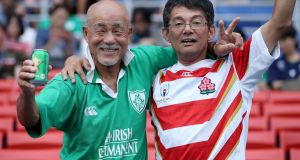 Father Donal Doyle may or may not be the oldest Irish fan in Fukuroi this weekend – he turns 88 in two weeks – but he must surely be the most conflicted.

A Dubliner born in Baggot Street in 1931, he went to secondary school in Belvedere College where, then as now, rugby was a second religion. Deeply committed to the first religion, however, he decided to become a priest, which led him to volunteer for the Jesuit mission to Japan in the late 1950s.

Sixty years later, he’s still there. If he hasn’t gone native entirely yet, the teachers back in Belvo must have inoculated him against it. But at his home in Tokyo’s Sophia University this week, he spoke with undisguised affection for the hard-working, regimented, and relentlessly polite people among whom he has spent most of his life.

Maybe Japan is also where he developed the art of understatement – another local trait – or maybe he had it already. In any case, the furthest he would be drawn on competing loyalties was to say: “I feel comfortable with the Japanese people”. If their rugby team were to beat Ireland, you sensed, he would not be as upset as most old Belvedereans.

Mind you, like the Christian Brothers, the Jesuits have done their bit for the cause of soft Irish imperialism. Fr Doyle is no exception. He recalls with a laugh that a late teaching colleague, Gerry Bourke, used to draw maps of the world for his Japanese students in which Ireland was always at the centre, like ancient Rome.

In a similar spirit, during the 1980s, Doyle set up an Irish studies programme at the university, and through it brought a group of students to Ireland every year for a month, 27 years running.

The trip included a home stay with families in Dublin’s leafy Mount Merrion (a suitably gentle immersion in our wild Irish ways), but also came to include visits to the Dáil, the Mansion House, and Áras an Uachtaráin, as well as a country-wide tour.

It always ended with a party in the old Doyle homestead on Baggot Street, where Donal’s brother Frank had a dental practice, and where a preserved bullet hole from 1916 formed part of the visitors’ education.

There are 360 Japanese people alive now who were thereby introduced to Ireland for the first time. Most have since gone back at least once.

So the Doyle initiative blazed a trail for an official promotion campaign that was launched in Japan this week. The latest campaign slogan will not go as far as claiming that we’re the centre of the world, exactly. It opts instead for Japanese-style understatement — “Ireland: Closer than you think.”

In the meantime, thousands of unofficial envoys, Irish rugby fans, have joined Fr Doyle in descending on Fukuroi. Not that many are staying there. A small city with only five hotels, boosted by another homestay scheme, it could not accommodate much of the crowd.

Apart from hosting the match, arguably, its biggest contribution to the weekend may have been to launch a thousand jokes about how “Fukuroi” sounds like something Mick McCarthy might have said during another World Cup, in 2002.

Most fans were instead either commuting up and down from Tokyo on the ear-poppingly fast Shinkansen, or overnighting in one of the two bigger cities nearby, Shizuoka or Hamamatsu.

Surprised at how soon he had arrived in the former on Friday afternoon, a harassed-looking young Tipperary man struggled to get his bags together in time to exit and commented: “They don’t call it the bullet train for nothing”. Clearly shaken by his exertions in Tokyo, he added: “I’m giving up drink when I get home.”

The rest of us stayed on as far as Hamamatsu where, speaking of drink, Irish supporters still in search of it on Friday were forced for a time to congregate in a pub called the Lord Nelson. Happily, word leaked out of the existence somewhere of the inevitable Irish bar – part of another empire on which the sun never sets – called Tir na n-Óg, which was to open at 6pm.

Sure enough, shortly after teatime, a group of Monaghan and Derry men had ensconced themselves at the counter of the small underground premises, which quickly filled.

But it turned out that the proprietor, Yoshiko Oishi, was Japanese. And the nearest thing she had to Guinness was a stout brewed locally near Mount Fuji. In fact, the menu’s description of another craft brew — “barely controlled bitterness with a hint of an angry edge” – might in Dublin have sounded like a portrait of the customers rather than the beer.

Under cross-examination, Yoshiko admitted apologetically that the bar wasn’t really Irish at all. She just liked the name Tir Na n-Óg, which had been suggested by her daughter.

A fondness for pub life is one of the few things the Irish and Japanese have obviously in common. Fr Doyle had said as much of his adopted compatriots: “Their lives are hard – they work long hours and they live in very small places. But they enjoy themselves in the pub.”

The Tir na n-Óg was a case in point. Except for the foreigners at the counter, most customers on early Friday evening were Japanese.

Even so, it emerged in further questioning that the proprietor had toured Ireland five years ago, sampling plenty of Guinness along the way. Then she introduced us to one of her locals, Takahiro Mizuguchi (26), who had been playing classical violin since childhood but for three years now re-learning it as “the fiddle”, mainly by watching Youtube videos of Martin Hayes. He would be performing in the pub Saturday night, he promised.

That was enough for us. We reassured the proprietor that in disavowing the business’s Hibernian credentials, she had been too modest altogether. By the powers vested in us as wearers of green jerseys abroad, we declared her pub officially Irish. In fairness, it was more authentic than many.