Beale set to join Zebo in potent Racing 92 back line 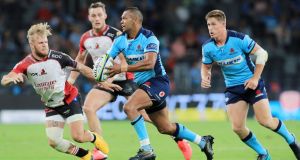 Confirmation of Kurtley Beale’s arrival at Racing 92 will not affect Simon Zebo’s position at the Parisian club.

The 92-times capped Wallabies utility back could potentially add more competition at Zebo’s favoured position of fullback and will arrive in July, but his acquisition is primarily in place of Brice Dulin, the specialist French ‘15’ who is joining La Rochelle next season.

Zebo has taken up the option of a third year on his contract, from July 1st onwards, with Racing 92 and akin to his ability to play on either wing as well as fullback, Beale’s versatility also gives general manager Laurent Travers options aplenty.

Aside from the possibility of accommodating both Zebo and Beale in the back three, the latter has plenty of experience playing at centre and is also seen as a potential stand-in, and like-minded spirit, for Finn Russell at outhalf on the presumption that he returns to the Scottish side.

In a year’s time, by which point he’ll have turned 31, Zebo will most probably be facing the last big contract decision of his career, as he recently admitted in an interview with The Irish Times.

“Wherever I decide to play my rugby then will be where I finish. I’ll hopefully play until I’m 33/34. I don’t see myself playing till 36/37. I wouldn’t have the motivation to keep playing quite that long, to be honest with you, but at the moment I’m enjoying it and where I sign my next contract I would imagine it will be my last.”

That will most likely mean staying with Racing or returning to Munster.

“I’d imagine it would be Racing or Munster. They’re the two teams in my head. Neither of them might want me, I could want to new seek pastures elsewhere, you never know, because rugby doesn’t last forever so every experience is really important. We’ll have to see, but at the moment it would be Paris or Cork.”

The coronavirus pandemic has seemingly cooled the normal turnover in playing personnel, for the time being anyway, and Racing’s only other confirmed arrivals are the Rebels’ lock Luke Jones, the winger Donovan Taofifenua from Clermont and another lock, Wesley Lindor, from Massy in the ProD2.

In addition to Dulin, the gargantuan Tongan prop Ben Tameifuna is bound for Bordeaux Begles while the Georgian Vasil Kakovin and the Australian-born Fijian winger Ben Volavola are joining Perpignan, albeit Volavola will return to Racing after one season with the newly promoted club.

1 My sporting disappointment: Jimmy White and the elusive World Championship
2 Rory McIlroy: Maybe I’m just not as good as I used to be
3 The Offload: Joe Schmidt the influencer is due a second act
4 World Rugby push back on extending residency rule
5 Ken Early: PSG would be sensible final move for Ronaldo
Real news has value SUBSCRIBE