Wales set up quarter-final with France after seeing off Uruguay

Nicky Smith, Josh Adams, Tomos Williams and Gareth Davies were all on the scoresheet 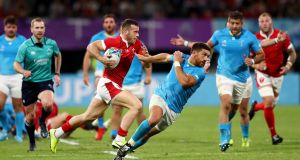 Wales duly booked a quarter-final against France with victory over Uruguay but what was a largely second-string side were made to far dig deeper than expected by the spirited South Americans.

Nicky Smith, Josh Adams, Tomos Williams and Gareth Davies were all on the scoresheet while Wales were also awarded a penalty try to ensure they finish their pool stage campaign with a 100 per cent record for the first time since 1987. But after Warren Gatland had insisted that the door was still open for fringe players to force their way into his plans against France, few took the opportunity to go through it.

Gatland had made 13 changes from the side which overcame Fiji with only Adams and Hadleigh Parkes keeping their place. Justin Tipuric and possibly Aaron Wainwright were the only other starters against Uruguay who are likely face France. It must be said however, that Parkes was not among the better performers on a scrappy night for the Six Nations champions. Twice Hallam Amos was denied tries down the left because the final pass from Parkes went forward and that the inside-centre chose to kick the ball out with time up in the first half with Wales in a relatively promising position said everything about their showing in the first 40 minutes.

What followed – a bit of handbags in the tunnel – also demonstrated that Uruguay had succeeded in getting underneath the skin of their opponents and Rhys Patchell, auditioning for the fly-half spot if Dan Biggar is unavailable after another blow to the head against Fiji, came in for some particularly rough treatment. The main positive for Gatland is that it is another victory to chalk up and they top their pool as expected, having overcome Australia a couple of weeks ago. Moreover, he can be pleased that he had to play so few front-line players given how injury-hit his squad was at this stage of the tournament four years ago.

Wales began brightly but the handling errors were evident from the start with Amos, Bradley Davies and Aaron Shingler all culpable in promising positions. They were finally on the board after 17 minutes with Smith driving over from close range after concerted pressure. Leigh Halfpenny was on target with the straightforward conversion but two penalties from the Uruguay fly-half Felipe Berchesi brought the side currently ranked 18th in the world to within a point at the interval.

In a further demonstration of how hard Wales were finding it to break Uruguay down, Halfpenny opted to kick a penalty at goal early in the second half, rather than the corner. He struck the right-hand post, however, given Uruguay another psychological boost.

Any hopes of a remarkable upset became all the more distance when Adams went over for his fifth try of the tournament, finishing off a big overlap on the left before Amos had another ruled out because of another forward pass. A penalty try gave Wales even more breathing space but Uruguay scored the try their efforts deserved through their hooker German Kessler, one of the more conspicuous figures on the field replete with both moustache and mullet. That brought the difference to eight points but Wales responded almost immediately – Tomos Williams sniping over for the bonus point try. It might have been five tries had Amos not dropped the ball when diving for the line, denying him a third try, though there was dubiously looking forward pass in the buildup. It rather summed up Wales’s night, even if Gareth Davies turned on the afterburners to add a fifth try in the dying throes. – Guardian