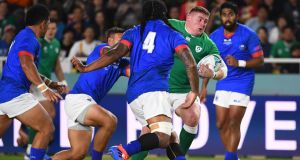 Everybody hurts sometimes. Take comfort in your friends. Andrew Porter began talking about Tadhg Furlong before veering into his own personal struggles. Here was genuine, unlooked for revelations from a 23-year-old who has muscled his way into the conversation about who will be remembered as Ireland’s best player at this World Cup.

You look at Porter, headphones, boomeranging matted hair and colourfully inked skin, you see hefty Samoans pause to admire his frame, and can easily presume so much. Fearless. Macho masculine man in the archaic sense.

It was was a night for laying platitudes at the feet of young Irish men, all but apologising for losing faith in them after the Japan collapse.

Porter’s contribution - increasingly the primary cover behind whoever, Furlong or Cian Healy, fades first - has been unfaltering since the squad landed in dusty Chiba.

“Yeah it’s all I can do, it’s what I’ve been looking to bring to this World Cup especially just putting my best foot forward each game and trying to prove to myself that I’m able to be at this level because you have those days when you’re lacking in confidence. If you’re named on the bench sometimes you might be looking at yourself and asking ‘am I good enough?’”

Hold on. We see doubt in his eyes. Sometimes everything is wrong. These World Cups can be hell, especially when total failure was looming.

The temptation is to abandon all professionalism and tell him you love him. Instead we ask how he found a way through the dark woods of self doubt.

“Slowly but surely. I am still always learning at tighthead especially because I’ve only moved there and this my second year playing there. I am always learning in that sense. It’s just about trying to keep getting better and better. That’s all I can do.”

“[The confidence] is growing, it’s growing,” Porter repeats. “I think confidence is growing across the squad now from these last two games. This will give us great confidence coming into a quarter-final.”

Take comfort in your friends.

“We all try and help each other really. The lads would be more than happy to sit down with me and help me through scrums in training and scrums in games. Feeky [Greg Feek, the former All Black turned Irish scrum guru] has been great, being able to push me forward to give me more and more confidence.”

Ireland - when everyone shows up - are as honest a team as any sport has ever known. CJ Stander carried with absolute disregard for his own safety. Keith Earls and the other backs worked with possessed zeal after Bundee Aki was sent off. Pete O’Mahony came on and took the full brunt of Samoan frustration when refusing to release stolen possession. Josh van der Flier hunted with technical supremacy. James Ryan became a world calibre lineout operator before our eyes. Jordan Larmour danced. Johnny Sexton nabbed two tries. Conor Murray made everyone sing.

Best of all was Furlong’s try. The finish deserves its place alongside Ronnie Whelan’s shin shot to beat Dasayev at Euro ‘88. Murray fed the Wexford prop at full tilt moving into fellow tighthead, Michael Alaalatoa, who was bumped, before Alapati Leiua attempted to rip the ball only for Tadhg Furlong to pirouette away. There was rough terrain ahead as Filo Paulo - perhaps the biggest human alive today - lined him up for an almighty wallop.

The behemoth was unable to slow Furlong, who brought the six foot eight 122 kilogram free agent within an inch of the line. On bouncing impact with shredded grass he twisted his elbows over the whitewash.

“Nothing,” Furlong remembers. “It’s mad when you see stuff back and you’ve no clue as to when or how this happened. It’s kind of mad, really, when you’re in that moment. It floats away after.”

Porter, with searing honesty, talked about his own struggles and while they are real, he knows he is not alone.

“It’s something that we will really be looking to take hold of and push on. It doesn’t matter who we come up against, we are looking to bring our best game.”