Transformed Springboks out to lay down marker against All Blacks 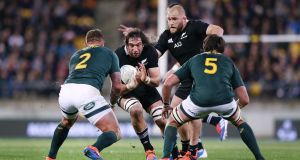 For two tournaments in the 1990s the World Cup opened with the sound of thunder. The meeting of the hosts and the holders was becoming a tradition when Wales were awarded the 1999 event and the organisers decided it would not be an ideal start if South Africa got near the 96 points they put on the men in red the year before.

So World Cups have tended to start with, if not a whimper, then something less than a bellow, although Argentina in 2007, when they were involved in the opener for the third successive tournament, ignored the script and beat France (they might have embarrassed Australia four years before had they been allowed to scrummage).

The ninth World Cup starts on Friday, September 20th, with a match that should be as one-sided as the two openers in New Zealand in 1987 and 2011. When Japan face Russia the outcome should be as predictable as the result of a presidential election in the land of Vladimir Putin. Pyrotechnics will be reserved for the opening ceremony.

The following day, however, New Zealand face South Africa, a meeting of the two most successful sides in international rugby who have won five of the eight World Cups. It is a repeat of the 1995 final, played in the month of the death of Chester Williams, the only non-white player in the Springboks’ squad that autumn and one of three wings that afternoon who has since died of a heart attack, Jonah Lomu and James Small being the others. Just one score separated the sides that day, as was the case in the 2015 semi-final.

It was not that long ago that South Africa resembled Wales in 1998. They lost to Italy in 2016 but more than half of the 23 who were involved that day will be in Japan. They had conceded 98 points in two Rugby Championship matches and the following year lost 57-0 to the All Blacks in Albany: 14 of that 23 will be at the World Cup.

They lost 38-3 to Ireland, looking shambolic and rudderless. It was when the former Munster coach Rassie Erasmus returned home at the end of the year, initially in an overlord capacity only to find himself soon running the national side, that the precipitous decline of the previous two years was first arrested and then put into reverse.

Their past three matches against New Zealand have been a 36-34 victory in Wellington, their first away to the All Blacks in nine years, a last-minute 32-30 defeat in the return in Pretoria and a 16-16 draw in Wellington in July. In the drawn game, their line speed denied the World Cup holders width and, as in Dublin the previous November, New Zealand were unable to think their way out of trouble.

South Africa were the first team to arrive in Japan having arranged to play the hosts in Kumagaya last Friday. Erasmus has brought in some new backs and ended the cap threshold a player must have reached to be eligible for selection if he is based abroad, but he has largely used players he inherited, restoring self-belief and pride in a jersey that was looking moth-eaten.

The Yokohama showdown with New Zealand threatens to be one of the matches of the tournament, a throwback to the days when little separated the countries, and a potential preview of the final. Whoever wins will almost certainly top the group with Italy, Canada and Namibia to come, although that could leave both sides going into the quarter-finals underexposed.

South Africa and Ireland have, since the last World Cup, found a way of defeating New Zealand and, if the All Blacks lose the opener, they would, if form prevails, meet Ireland in the last eight. The World Cup winners in 2011 and 2015, who have not lost a match in the tournament since falling to France in Cardiff 12 years ago, are seen as vulnerable, their 10-year hold on the top of the world rankings ending this summer.

The bookmakers have New Zealand, South Africa, Ireland and England as the four most likely winners, but at most only two of the first three will make the semi-finals because of the way the groups have aligned.

It has not often paid to write off the All Blacks, who will have spent this year, and never mind their mediocrity in the Rugby Championship, planning for South Africa in Yokohama. They have been adept down the years at ironing out wrinkles and turning weakness into strength. It makes the prospect of the match so appealing and it stands out on a weekend when France play Argentina, where the loser will need to beat England to keep their knock-out dream alive, and Ireland face Scotland.

One difference Erasmus has made is in taking control of selection and shutting the door to the outside. The advantage of taking over a team that is sinking towards the bottom is that you can dictate your own terms, and so out went the cap quota. South Africa through the years had a reputation for mental, as well as physical, hardness, uncomplicated and direct, and he is tapping into that.

When Erasmus took charge he said: “I really believe we have the players and the rugby to turn things around and to mount a serious challenge at the World Cup.” Not many believed him then. It is different now. – Guardian

1 Liam Toland: Larmour can distract England while others flourish
2 ‘Manchester United are lucky to have you’: Klopp responds to Donegal schoolboy’s letter
3 England name Jonathan Joseph on the left wing
4 Six Nations: Ireland v England all you need to know guide
5 This month a decade ago, football and Dublin changed course
Real news has value SUBSCRIBE