Jacob Stockdale back on track after ending try drought 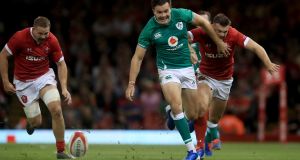 Rare is the Irish rugby career that starts with a bang and carries on serenely without a few dips and brickbats along the way. Not even Brian O’Driscoll’s worked out like that.

When Jacob Stockdale was scoring his seventh try in the 2018 Grand Slam campaign at Twickenham, the then 21-year-old could do no wrong. Still, effectively, in his rookie season, he scored 11 tries in his first nine Tests – very un-Irish like altogether.

Of course, it couldn’t last. Going into the Twickenham warm-up game against England, Stockdale had scored three tries in his subsequent 10 Tests. Memories are short, and despite being hung out to dry in many respects by the defensive flaws inside, Stockdale copped plenty of criticism for failing to cut off at least three English walk-ins.

“To be honest, it was a really important game for me, probably just to shut a few people up more than anything. It was really important for me to get out there and put in a good performance, get Twickenham out of the system a wee bit. I didn’t ask Joe to play or anything but I was really grateful he gave me the opportunity for a second week in a row and gave me the chance to go out and actually put a few wrongs right.”

Stockdale admits the brickbats stirred him up for last week’s two-try performance against Wales.

“To be honest, I’d say a lot of the criticism quite annoyed me because I felt a lot of it was quite unfair but, at the same time, it probably gave me a lot of good motivation.

“Reading a few tweets gets you a bit rattled up and prepared for the next week. A lot of them say you shouldn’t read stuff but I do. I read the good stuff and the bad stuff because the good stuff is nice, to see people saying nice things about you, and the bad stuff gives me a lot of motivation to prove people wrong. It was really important for me.

“I suppose to a certain extent I was surprised by maybe how much I got because there were a few things I felt weren’t my fault. But, at the same time, it was one of my poorer performances in an Ireland shirt and in sport you’re going to get people who aren’t happy with how you played and that’s fair enough.”

As to what the keyboard warriors were saying, Stockdale said, laughing: “I got a few very abusive messages mainly about the hair actually.

“That wasn’t the reason I got it cut,” he adds quickly. “I felt like a change, it actually had nothing to do with the rugby and what people were saying. I just kind of decided to.”

All of which explains Stockdale grabbing his crest and celebrating more animatedly than normally after scoring his first of two tries against Wales last Saturday. Akin to goals for strikers, wingers thrive on tries, and it also ended a barren run of seven games without a try for province and country, which included his faux pas against Leinster when not grounding the ball properly in the Heineken Champions Cup quarter-final.

“In fairness as a winger you want to be scoring tries and I hadn’t scored I think since the Italy game in the Six Nations. It was important for me personally to get back on the score sheet. I have to give Andrew Conway a fair bit of credit for that one. I think that was pretty much his – fortunately I was there to finish it off. It was just nice to get over the whitewash again and get back on track.”

Stockdale credits Jason Cowman and Ciaran Ruddock for being in the shape of his life and, looking ahead to his first World Cup, recalled of the tour to Japan two years ago: “It was a huge culture shock for me. The first four or five days, I didn’t really enjoy it that much because it was so different.

“But then after being there a week or so, I started to enjoy it. And then by the time we were leaving, I absolutely loved it. I am actually really looking forward to getting back.”

He has some memories of the 2007 World Cup, but the 2011 tournament “was the first time I watched every group match. I was getting up at like four in the morning to watch matches because it was over in New Zealand. I think the games were 4am, 7am, 11am, something like that. I was a zombie for about seven weeks. I remember watching every single game, being obsessed with it for a while.”

His standout memory was watching the Ireland-Australia pool game after playing for Wallace High School seconds against Blackrock. “Tommy [Bowe] got the intercept off Quade Cooper when he got chased down by James O’Connor.

“He intercepted it and we were watching it with the Blackrock lads in school and the entire place was just going crazy like ‘Go, go, go!’”

The relatively barren run over, and the spring back in his step, Stockdale can afford a little dig at his boyhood hero.

“I probably would have scored it,” he says with a grin.