‘As a New Zealander I would expect he would know the New Zealand psyche,’ Hansen said 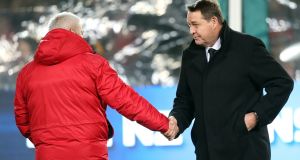 All too predictably the weekly war of words between Steven Hansen and Warren Gatland ramped up another notch overnight in Wellington, when the All Blacks head coach reacted indignantly to claims by his Lions counterpart that Conor Murray had been tackled late and dangerously during the first test.

Although Gatland didn’t name the perpetrator (Jerome Kaino) when he dived into Murray’s standing leg after the scrum-half launched a box kick in the 10th minute, it’s clear that is the incident he was referring to when he brought the matter up at his Sunday press conference.

To recap, Gatland said: “The concern for me was there were a couple of times where there’s a charge down where someone has dived at Conor’s legs. I thought that was a little bit dangerous. After he’s kicked, he’s been pushed to the ground a few times.

“It’s just a case of making sure he’s being looked after and protected and not harrassed after he’s box kicked. We will probably just get some clarity from the referee later in the week.”

Hansen was so annoyed by these comments that he went to the trouble of phoning the Devlin Radio Show on RadioSport at 9am local time to express his feelings.

“It was a predictable comment from Gatland isn’t it? Like two weeks ago, it was we cheated in the scrums. Last week it was blocking and now he’s saying this. But it’s really, really disappointing to hear it because what he’s implying is that we’re deliberately going out to injury someone and that’s not the case. We’ve never been like that, and as a New Zealander I would expect he would know the New Zealand psyche. It’s not about intentionally trying to hurt anybody, it’s about playing hard and fair.

“I mean if you look at the Test it was a great Test match. Both sides earned the respect of each other in a physical contest that at the time no-one was complaining about anything off key, and the fans that watched it. So it’s just really, really disappointing to hear him say that and to take away the gloss not only from the test match but his own team’s performance as well.”

When Devlin asked Hansen why Gatland was “saying stuff like that”, Hansen answered: “I don’t know. I guess he might be a bit desperate or something, I’m not sure. I don’t know why he’d say it.”

Devlin followed up by reading out the following comment from Gatland: “It’s a little concerning. They’re not actually trying to charge the kick down. They’re nowhere it and they’re diving blindly at someone’s leg.”

In response to this, Hansen said: “He’s implying that we’re trying to hurt the guy. Rugby is about playing within the laws, and in this case we’re trying to charge the kick down and/or tackle him. Both those things are legal. That’s what the game is built around. He (Murray) is one of their key players, but that doesn’t mean to say he has the right to go around the park without being charged down or tackled.

“It’s just disappointing that after such a great test match, two days after – what is it now, Monday – he’s coming out and saying something like that.”

Gatland had confirmed that he would bring up the matter with the second test referee Jerome Garces at their pre-match meeting on Friday.

Yet Hansen countered: “I wouldn’t expect it to be a topic of conversation with the officials because it wasn’t in the game. There is a guy who is watching for foul play all the time and if he thought it was foul play he would indicate it to the referee in the course of the 80 minutes. It never was and it never will be as long as I’m involved with the All Blacks.

“Yeah, we’re a team that wants to play hard but we want to play fair and we’ll challenge teams to do the same to us and then we’ll see who’s got the best skills set and the capability to take the opportunities that are given to us in the 80 minutes, and then it’s start again.”

Start again next Saturday in the Westpac Stadium they certainly will.