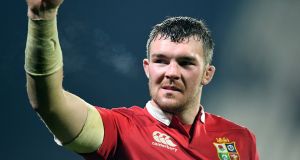 Peter O’Mahony of the Lions celebrating the win over the Crusaders. Photograph: Reuters

Peter O’Mahony will captain the British & Irish Lions against the Maori All Blacks at Rotorua International Stadium on Saturday. The Munster captain will follow tour skipper follows Sam Warburton, Ken Owens and Alun Wyn Jones in leading the tourists one week out from the first test.

The selection retains the core of the side that accounted for the previously unbeaten Crusaders last Saturday, as will be the case again when facing New Zealand next Saturday.

All told, 11 of the side which started against the Crusaders will do so against the Maoris, including all bar one of the pack, as Maro Itoje partners George Kruis in the absence of the rested aforementioned Wyn Jones.

Similarly, having backed up last Tuesday in playing twice within four days, CJ Stander isrested completely, as Johnny Sexton is re-united with Conor Murray at halfback, while in the absence of the departing Stuart Hogg, Leigh Halpfenny is restore at full-back and Anthony Watson starts on the wing.

Owen Farrell had been named on the bench, however he has been ruled out through injury and has been replaced by Dan Biggar.

This means that O’Mahony and Sean O’Brien flank Toby Faletau in the back-row, with Warburton on the bench, while Tadhg Furlong starts at tight-head. Jack McGrath and Iain Henderson are on the bench.

“We were obviously disappointed with the loss against the Highlanders and realise that we need to improve in several areas, including our discipline, but we feel that overall we are building well towards the Test matches,” said Warren Gatland.

“Every game is a big challenge, which is what we wanted, and this is an experienced Lions team with eight of the starting 15 involved in the last Test in Australia in 2013.”

Gatland added: “Peter is a proven captain with Munster. He never takes a backward step and we believe that those leadership qualities will serve us well on Saturday against a quality and determined Maori All Blacks team.”

1 Jim McGuinness: There is a way to save championship and make it competitive
2 Sordid murder of hurling brothers still resonates in south Galway
3 Klopp furious as injuries mount and VAR decisions prove costly
4 Maradooo! A preternaturally gifted artist and a rebel outsider
5 David Humphreys: Georgia simply can't be dropped in at the deep end
Real news has value SUBSCRIBE

Andrew Mackin orders up a double as Louth drink in Lory Meagher success 19:10
Carla Rowe helps set Dublin up with a chance to make it four-in-a-row 18:47
England see off stubborn Wales challenge to make Autumn Nations Cup final 18:24
Norwich denied three points as Coventry steal a point late on 17:47
Galway keep Tipperary at arm’s length to set up repeat final against Kilkenny 17:30
Crossword Get access to over 6,000 interactive crosswords