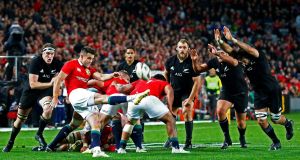 British and Irish Lions scrumhalf Conor Murray kicks the ball clear of danger during the Lions’ first Test match against the All Blacks. Photograph: David Gray/Reuters

Warren Gatland has publicly expressed his concern about the late hits on Lions scrumhalf Conor Murray by All Blacks players in the first Test, and will evidently raise the matter with the referee for the second Test, Jerome Garces, at their pre-match meeting next Friday in Wellington.

Twice during the first Test the All Blacks were penalised for coming through too early on Murray. Aaron Smith, dummied by Murray for his try in Chicago when he outplayed the All Blacks scrumhalf, set the tone in the first minute when clattering into Murray and conceding a penalty in the opposition half. Owen Franks followed suit for the Lions when conceding the penalty which led to the Lions’ first three points by Owen Farrell.

However, they might have been penalised a couple of times more for coming through late on Murray, most notably when Jerome Kaino toppled the Ireland and Munster number nine by diving through on his standing leg in the 10th minute.

In the 38th minute Brodie Retallick came through late to knock Murray to ground after another good touchfinder, which was more a push than anything else, although Murray hurt his hand and motioned toward Garces on the sidelines.

“There were a couple of times where he’s kicked and they’ve just pushed him to the ground after he’s box-kicked, so I don’t know if it was a tactic,” said Gatland.

But it was the Kaino incident which clearly disappointed the Lions head coach.

“From my point of view, if someone pushes him afterwards, that’s fine but diving at his leg? I know other teams have used that in the past and I think Joe [Schmidt] has come out and was pretty critical about that being a tactic other teams have used against Conor. It’s just a safety issue for me. I’d hate to see someone dive at his leg and have him blow a knee and then wreck his rugby career.”

Both the referee’s assistant, Romain Poite, and the TMO, George Ayoub, said of the incident, “there’s nothing in it.”

Gatland’s comments will no doubt provoke a response from the All Blacks and the New Zealand Herald, but his concerns are clearly genuine.

“It’s just a case of making sure he’s being looked after and protected and not harassed after he’s box-kicked. We will probably just get some clarity from the referee later in the week. Conor has had a bit of treatment like that previously. It’s a little bit tough. When you see someone dive at someone’s leg, you feel for the player.

“It’s a little bit concerning that they are not actually trying to charge the kick down because they are nowhere near it. They are actually diving blindly and hitting someone’s leg. For me, it’s just about protecting the players and making sure they are safe. That’s my biggest concern. I will just be asking politely that the officials look at that and make sure they protect him.”

After his superb performance in the win over Chicago, the All Blacks clearly targeted Murray in the rematch at the Aviva Stadium, although it was after he was targeted by Glasgow in the European Champions Cup pool match in Scotstoun that Murray vented his anger post-match.

“I’m properly p****ed off about that,” he said at the time. “I don’t see any benefit in charging down someone’s standing leg, I only see it as a danger or as a potential to get injured.

“Luckily my leg came out of the ground and I managed to fall over, but if my leg stayed in the ground – especially in that [artificial] surface – you’re looking at syndesmosis, you’re looking at the cruciate (ligament). I’m not blaming the players. I don’t know who told them to do it but it’s very dangerous. Thankfully I didn’t get injured. They’re the only team I’ve come across that did it.”

Speaking about the same incident, Schmidt said at the time: “It was fairly public that there was dissatisfaction and I totally understand Conor being disappointed with how it happened. You can’t charge a ball down from the blindside, you have got to go through the standing leg and the potential for injury there is clearly evident.

“You only have to see how Conor just managed to lift his foot in that first 25 seconds, otherwise if his foot is anchored he’s going to blow his knee out, potential ACL [anterior cruciate ligament], MCL [medial], the whole shebang.”

Even without TJ Perenara and Beauden Barrett, the Hurricanes possess a potent back line with Laumape, All Blacks winger Nehe Milner-Skudder, Savea, the recently capped Barrett and Vince Aso.