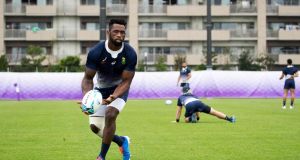 South Africa’s head coach Rassie Erasmus has picked his strongest, most settled team to tackle New Zealand in the highest-profile fixture of the World Cup’s opening weekend. The return of skipper Siya Kolisi is the solitary change to the 23 who held the All Blacks to a 16-16 draw in Wellington in late July.

The side is precisely the same as the one which defeated Japan 41-7 in Kumagaya two weeks ago, making it the first time for four years the Springboks have named an unchanged matchday squad. Their powerful No 8 Duane Vermeulen will be appearing in his 50th Test.

Never before have South Africa and New Zealand been required to play each other in a pool game, with the countries boasting two wins apiece from four previous World Cup knock-out meetings. Rarely, though, have the Springboks entered a World Cup in more confident mood: there are a total of 919 caps in their matchday squad and their well-balanced starting XV has an average age of 27.

“We have 31 players in the squad, any of whom I would be happy to select, but this is a line-up that has worked well as a starting combination with real momentum to come from the bench,” said Erasmus. “They have emerged together over the past 18 months as our game has developed and matured. We’ve prepared well and we’re looking forward to what will be another extremely close match.”

In their last three matches with New Zealand the aggregate score has been 82-82 and all but one of their previous World Cup games has been settled by four points or fewer. Erasmus believes it makes this match too tight to call. “You couldn’t say there is a favourite. I think we have a healthy respect for each other’s capabilities but, in the end, it will come down to a small moment to decide a big game. Our job is to focus on executing our plan and our skills to the best of our ability and hope that that is enough.”

Replacement François Steyn is the only survivor from the last Springbok squad to win a World Cup in 2007 and is hoping to become only the second Springbok to win two world titles after Os du Randt. New Zealand are due to announce their line-up on Thursday for Saturday’s game, with weather forecasters predicting a wet weekend in Yokohama. – Guardian