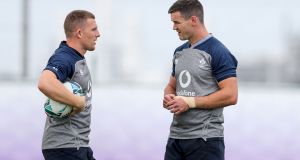 Continued doubts over the fitness of Rob Kearney and Keith Earls ahead of the World Cup opener against Scotland in Yokohama this Sunday look set to mean an Ireland back three of Andrew Conway at fullback with Jordan Larmour and Jacob Stockdale on the wings.

On Kearney and Earls, Ireland defence coach Andy Farrell told the media on Wednesday morning: “They are available. There are a few protocols that they need to go though with the medical staff.”

However, when asked about the progress at training of Conway (15 caps, nine starts and only two at fullback) and Larmour (16 caps, six starts and only two on the wing), Farrell added: “They don’t see themselves as just part of the squad now, they are team members building for something special hopefully at the weekend. Jordan is a young lad but where he has come from in the last couple of years in remarkable.”

Joey Carbery has been training fully with the team since Monday and is due to be named on the bench.

The Scotland camp are also expecting to see Garry Ringrose partner Bundee Aki in midfield now Robbie Henshaw is ruled out with an unspecified hamstring injury.

“Obviously [HENSHAW]is a great player,” said Scotland’s Peter Horne. “Such a good defender and really good going forward. They lose one but Ringrose is awesome, such a smart attacker, great defender. I have a lot of respect for him.

“If Kearney is to be out and Conway is to come that is another world class player that we have got to be fully aware of,” said Scotland fullback Stuart Hogg. “Whatever team Ireland put out we are going to have them match it to beat it. Exciting times whether they play their best team or boys who don’t have as much experience it is still a huge challenge for us.”

The rest of the Ireland team largely picks itself with Iain Henderson’s role as primary lineout caller expected to see him named at second row alongside James Ryan.

A backrow of Peter O’Mahony, Josh van der Flier and CJ Stander, who could edge Jack Conan at number eight, is primed to start against Scotland with Joe Schmidt to make some changes during the six day turnaround before facing Japan.

The team will be confirmed on Friday morning Irish time.