South Africa condemn England to five defeats in a row 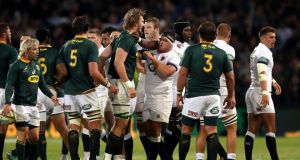 Tempers flare as a fight breaks out between the two teams in Bloemfontein. Photo: David Rogers/Getty Images

South Africa profited from a second-half penalty try to inflict more misery on England with a 23-12 victory and a series win in the second test at the Free State Stadium on Saturday.

Poor discipline cost England again as they slipped to a fifth test loss in a row, piling the pressure on coach Eddie Jones some 15 months out from the World Cup in Japan next year. Number eight Duane Vermeulen scored a try for the Springboks, while outhalf Handre Pollard kicked three penalties and a conversion in a game that did not have the same high drama as the first test at Ellis Park, but was equally absorbing.

England scored their tries early through wings Mike Brown and Jonny May, while centre Owen Farrell kicked a conversion as they failed to register a point after the 13th minute.

For the second week running England surged into an early lead with two scores as they spread the ball wide and were met with brittle defence from the home side. The tourists sucked in the Bok forwards before creating a two-on-one overlap as Brown cantered in for the score.

George Ford was bombarding the Bok back-three with high balls and England contested these well, pinning the home side back in their half. After again ensuring the Boks committed numbers to the breakdown in a narrow defensive line, they swung the ball wide, this time to the right, and May crossed to score, though he was aided by a weak attempt at a tackle by Bok wing S’busiso Nkosi.

England held a 12-point lead with 13 minutes gone, but the Boks came alive with a series of lineouts and driving mauls that took them into the visitors’ 22. The tourists resisted until Vermeulen had too much power for the England defenders as he held off three to barge his way over the line.

England’s discipline, such an issue last weekend at Ellis Park, began to slip again as referee Romain Poite penalised them first for obstruction at the lineout and then for not releasing at the ruck and Pollard punished them twice to hand the Boks a 13-12 half-time lead.

The Boks extended that advantage after camping in the England half for the first 10 minutes of the second period, with Poite awarding a penalty try as the tourists collapsed the set-piece a yard from their own line having been muscled backwards. After Pollard extended the Boks’ lead to 11 points with another penalty, England introduced Danny Cipriani at outhalf for his first test cap since 2015.

But England’s discipline again let them down again as they were reduced to 14 players for virtually the remainder of the game when replacement Nathan Hughes was sin-binned for playing the ball on the floor, Poite finally losing patience with repeated infringements. It was always going to be difficult to break down an improved Bok defence in the final 10 minutes with a man down and the home side held on for the series win.

The third and final test will be played in Cape Town on June 23rd.