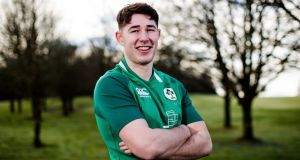 David McCann: “It’s a great honour to be asked to captain the side.” Photograph: Ryan Byrne/Inpho I

New Irish under-20 captain David McCann said it is a huge honour to be asked to lead the side and the promising Ulster backrow said he can’t wait for the Six Nations to start next week.

McCann is one of seven survivors from the squad which won the Six Nations Grand Slam last year but his participation in the World Championship in Argentina was brought to a halt after three games when he suffered a concussion.

He doesn’t need to look outside the Ulster academy, where he’s in his second year, to find an inspirational captain in Willie Anderson and the former Irish international is one of many who has shaped his progress from mini-rugby with Cooke RFC, through to a senior cup win with RBAI and underage with Ireland at under-18 and under-19 before last season’s triumph.

But he doesn’t believe last season’s success is going to be a burden when they open their campaign against Scotland in Cork next week.

“Definitely not, that’s come and gone. It’s a fresh start with mostly new boys. I think everyone is just looking forward to getting into it. It’s a great honour to be asked to captain the side.

“I captained one game with Ireland U-19s and also captained my school and Ulster A. It was a good experience to get. I only really captained my school in my last year, sort of built into it, quite liked it. I thought it’s a good thing, if you’re good at it, to keep going and try to build new skill-sets. I was lucky to have Willie Anderson in the Ulster academy who has captained Ireland. He’s helped me in that sort of role with Ulster.”

He knows that there is an onus on the seven survivors from last year to lead the way but pointed out that the leadership group assembled by Noel McNamara and his coaches has more new players than those who were there last season.

“I think just the way Noel drives everyone, he expects everyone to be up there. He knows that within the leadership group – which has three people returning and four who are new to 20s – he expects them to drive the standards.

“He doesn’t put too much focus or pressure on the boys who are returning. You can tell the boys who have been here before . . . they know how it works and make the boys feel at ease.

“That core group of lads with a bit of experience help everyone else adjust and adapt to the training level that’s required,” added McCann.

McNamara said that McCann had all the qualities to skipper the side but stressed the important of the leadership group sharing the load.

“It’s an interesting challenge that captaincy, I’ve spoken quite a bit on it before. I’m reluctant to put too much pressure on the captain. I firmly believe in the leadership group and that’s something that we will have very much in place again.

“The reality is as a 19-, 20-year-old, you don’t have all the tools to lead on your own, so I think it is really important that they are supported.

“What David has, first and foremost . . He is an excellent rugby player. I think we saw that during the Six Nations last year, but particularly at the World Cup – he was absolutely brilliant in those first three games and we really missed him, unfortunately, when he got injured.

“He has really kicked on since then. He led Ireland at under-19 level in France last year. He then went on and captained Ulster in the Celtic Cup.

“He has got a point of view, he has got a strong personality. I look forward to supporting him and helping him grow through his own leadership, and also growing the rest,” said McNamara.