‘The player has expressed his deep regret and has been sanctioned’ 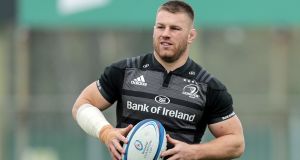 Sean O’Brien has been sanctioned following an incident in a Dublin pub.

The IRFU has declined to name Seán O’Brien or reveal what the London Irish bound flanker did the night after lifting the Guinness Pro14 trophy in Murrayfield to warrant a “sanction.”

This follows an internal IRFU investigation into O’Brien’s actions on May 26th.

“The IRFU have investigated an incident of inappropriate behaviour by a player which occurred on 26th May 2019 (Sunday night),” read an IRFU statement. “The player has expressed his deep regret and has been sanctioned in line with the provisions of his contract.”

Irish rugby’s governing body did not release details of the sanction. O’Brien, who could not be reached for comment, allegedly urinated on another man in Cassidy’s pub on Camden Street.

“The player has apologised to the individual involved. The IRFU, and the player, regret any upset that this incident has caused.”

O’Brien’s case was handled by the IRFU, not Leinster, as he remains on a national contract until after the World Cup. The 32-year-old has been ruled out of the tournament to recover from hip surgery as he seeks to salvage a lucrative move to the newly promoted English Premiership club.

“It’s going to be a whole resurface of my hip joint,” said O’Brien recently, adding it’s “a shot in the dark” to continue his illustrious career.

Leinster stated on June 5th that a separate investigation into an assault by former player Stanley Wright (40) on a Leinster academy player, at a private team function in the early hours of May 26th in the Intercontinental hotel, has concluded to the “satisfaction of all parties.”

The academy player (20) was knocked unconscious by a punch from Wright. He was hospitalised but Leinster stated that he “has made a full recovery.” The player did not to press charges.

It remains unclear how Wright came to be present at Leinster’s private party after the squad returned from Edinburgh following the Pro 14 final.

The Cook Islands international prop was in Dublin for a “Gala Dinner” celebrating 10 years since Leinster won their first European Cup.

Considering a large contingent of current Leinster players were in the hotel when the assault occurred, it also remains unclear how or why Leinster permitted Wright to attend an official function in the RDS the following Tuesday, May 28th. Wright even took to the stage that night to be interviewed by MC Martin Bayfield (the former England international) alongside current Leinster assistant coach Felipe Contepomi and player Fergus McFadden.