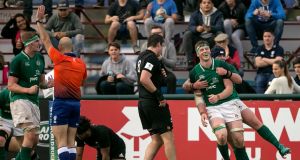 Ireland’s courage in adversity was once again evident but a slow start in which they conceded 26-points left them with too much to do as New Zealand emerged deserving winners of the seventh-place playoff at the Under 20 Rugby World Cup in Rosario, Argentina.

The discrepancy on the scoreboard is a tad harsh on Ireland, and the manner in which they clawed their way back to 26-17 with half an hour remaining suggested that a miraculous recovery was possible if not probable, but fatigue and the odd crucial handling error cost them the opportunity of bridging that gap further.

The Baby Blacks finished the stronger, adding two further tries to make the final 15 minutes less fraught from their perspective.

Ireland’s head coach Noel McNamara will be proud of his charges and the manner in which they retained an unshakeable belief in the patterns they wanted to play; three tries was a fitting reward and there could have been a few more. To a man, they deserve credit. Dylan Tierney-Martin never took a backward step, Charlie Ryan led by example, Thomas Ahern was remarkable for a player, a year young, so too Brian Deeny.

Josh Wycherley, Thomas Clarkson, Ryan Baird and Ronan Watters deserve special mention up front, so too the excellent Cormac Foley and Liam Turner, who had his best game of the tournament, but in truth it seems churlish to single anyone out.

In some respects it was a match too far for a depleted Ireland, who simply had no answer initially to New Zealand’s physicality. The Baby Blacks did as they pleased, bossing the collisions, getting over the gainline with ease and freeing hands through the tackle to offload at will.

They ran in four tries in the first quarter of the match, profiting from some brittle tackling and a lack of cohesion in defence that is inevitable through change and fatigue, the latter borne of the physical toll of playing five matches.

Ireland were left to rue some mistakes that contributed to their early discomfort, passes that were forced or overrun, handling errors that cost them position and possession. New Zealand were ruthless from turnover ball. They also didn’t have to commit as many players to guarantee quick possession, in marked contrast to their opponents, who had to employ greater numbers to secure breakdown ball.

At 26-0 down after the first quarter the portents were ominous but as they have done throughout the 10 matches this season in the Six Nations and World Cup, this young Irish side has shown tremendous spirit and resolve. McNamara’s side generated reasonable currency during New Zealand centre Proctor’s 10-minute sin bin for a high tackle.

A try from loosehead prop Wycherley was a fitting reward for some excellent Irish play, in which they were patient, precise and direct in their carrying. Jake Flannery couldn’t add the conversion but tagged on the extra points two minutes after the restart with a try from hooker Tierney-Martin.

It was a superbly crafted score, the outstanding Baird winning the kickoff and Cormac Foley, who had a superb game in the centre, demonstrated his excellent footwork to beat several tacklers; the forwards took over in the shadow of the New Zealand posts.

Even better was to follow, and a contender for the try of the tournament, Turner making some headway, Wycherley with a great offload and then Baird and Casey exchanging passes with the former dotting down in the corner. Emboldened by the manner in which they ripped the New Zealand defence to shreds, Ireland, especially through wing Angus Kernohan, started to beat players at will.

Ireland were in the ascendant, New Zealand rattled, and had one or two passes stuck, McNamara’s side could have squeezed the gap ever closer, than 26-17 going into the final quarter.

They were left to rue those missed opportunities on 66 minutes when the Baby Blacks pilfered a try against the run of player; Tamaiti Williams carried three Irish tacklers over the line following a great break and chip by fullback Cole Forbes.

Ireland continued to pursue an expansive game but it was New Zealand who had the final word, hooker Shilo Klein driven over from a lineout maul, Rivez Reihana once again converted. The final margin was a little flattering to New Zealand – there is no argument with the merit of their win – but in defeat and given the nature of their performance, Ireland lost nothing.

1 Liverpool among clubs to argue against paying €384m TV rebate
2 Munster braced for worst of financial crisis due to Thomond Park debt
3 Gerry Thornley: Home and away Six Nations could be its ruination
4 European clubs must take lessons from financial demise of former greats
Real news has value SUBSCRIBE