Slow start against New Zealand let Ireland down, but plenty of positives from campaign 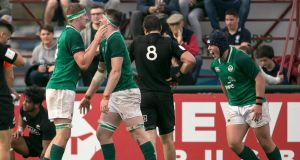 Ireland’s Ryan Baird celebrates his try with Charlie Ryan and Josh Wycherley in their defeat to New Zealand in the World Rugby U20 Championship. Photograph: Pablo Gasparini/Inpho

A remarkable season concluded with a typically robust and obdurate performance in the final match of the Under-20 Rugby World Championship in Rosario, Noel McNamara’s charges once again displaying character in adversity. It didn’t suffice to earn a victory because a slow start neutered their ambition.

In defeats to Australia, England (the playoff match) and New Zealand, Ireland leaked fistfuls of points in short bursts, a vulnerability that cost them a chance to add further silverware to the Six Nations Grand Slam title triumph earlier in the season. Instead France squeezed out Australia in the final to retain the trophy they won on home soil last year.

Pre-tournament injuries to key players compounded by the six forced home prematurely from Argentina rendered the task of making the semi-finals – all teams suffered if perhaps not to the same extent – much more difficult but into that environment several stepped in and up.

McNamara has consistently reiterated the same message that while results were important so too was the rugby development of the individual and in that respect that remit has been fulfilled when examining the season in its entirety, so too in the style of rugby (18 tries): that belief never waivered, irrespective of pressure or mistakes.

While there are some outstanding prospects within the squad, the team dynamic and the brotherhood that the players have referred to throughout the season encouraged them to make huge physical sacrifices for one another and provided the unity of purpose and belief, especially in the tougher moments.

As to the final match, New Zealand were deserving winners simply because they took more scoring opportunities than their opponents, benefiting hugely from a 26-point opening salvo in the first quarter of the match and then exploiting tired Irish minds and limbs to tag on another brace of tries in the final 10 minutes.

In between those bursts, Ireland often played the better rugby, grabbing three tries through Josh Wycherley, Dylan Tierney-Martin and Ryan Baird, a tally to which they could easily have added if precision and composure had accompanied several line breaks. Ireland clawed their way back to 26-17 down with half an hour remaining but mistakes and handling errors prevented them from making further inroads.

Charlie Ryan inspired by example, not least in his work rate and perhaps best illustrated in a team-leading tackle count (56) throughout the tournament. The pack toiled prodigiously and excelled in the scrum in particular. Props Wycherley and Thomas Clarkson enjoyed exceptional tournaments, so too the irrepressible hooker Tierney-Martin.

Thomas Ahern was remarkable for a player a year young, so too Brian Deeny, filling in capably at number eight. Given Ireland’s injury woes in the backrow, Ronan Watters deserves special mention for a series of towering performances. Ryan Baird consistently delivered on his immense potential throughout the tournament.

Craig Casey’s industry never diminished from the opening whistle while Jake Flannery is an elegant footballer and for me, best suited to outhalf rather than fullback. Cormac Foley, ostensibly a scrumhalf, was superb at inside centre, underlying his ability as a footballer.

Liam Turner had his best game of the tournament, a huge talent and it should also be noted that he played all 400 minutes, across five matches in 18 days, an exceptional physical achievement. Rob Russell and Angus Kernohan excelled in attack while young Max O’Reilly grew into the game nicely, in a back three that demonstrated some impressive footwork.

Ireland had no answer initially to New Zealand’s early physicality, the Baby Blacks did as they pleased, bossing the collisions, getting over the gain-line with ease and freeing hands through the tackle to offload at will.

They ran in four tries, powerful New Zealand wingers Etene Nanai Seturo (2) and Leicester Fainga’anuku contributed three, in accelerating to a 26-0 lead. This young Irish side has shown tremendous spirit and resolve and generated reasonable currency when New Zealand centre Billy Proctor received a yellow card for a high tackle.

Tries from Wycherley and Tierney-Martin either side of the interval was a fitting reward for some excellent Irish play, in which they were patient, precise and direct in their carrying.

Even better was to follow, Liam Turner made some headway, Ahern threw a great offload, Wycherley put Baird away and then he and Casey exchanged passes with Baird dotting down in the corner. Ireland were in the ascendant, New Zealand rattled, and had one or two passes stuck, McNamara’s side could have squeezed the gap ever closer, than 26-17 going into the final quarter.

They were left to rue those missed opportunities on 66 minutes when the Baby Blacks pilfered a try against the run of player; Tamaiti Williams carried three Irish tacklers over the line following a great break and chip by fullback Cole Forbes, while subsequently hooker New Zealand Shilo Klein was driven over from a lineout maul.

From an Irish perspective it wasn’t the tournament but placed in context it doesn’t really diminish the achievements of the class of 2019.