Outhalf has developed his playmaking abilities under Chris Boyd at Northampton 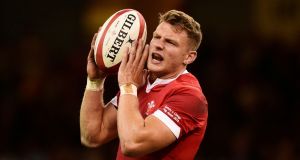 Wales’ Dan Biggar: throughout his career he has proved able to adapt his game to the demands of coaches. Photograph: Reuters/Rebecca Naden 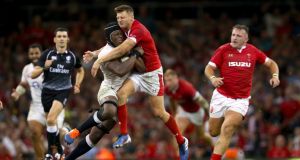 What is the Brexit brouhaha compared to the outhalf debate that has raged in Wales as long as the game has been played there?

Dan Biggar has the thickness of skin needed to absorb the impact of verbal barbs that the position triggers, but even he would have been jolted by an assertion last week that the World Cup would not be won with him in the starting line-up.

Biggar, who turns 30 during the tournament, turned from starter to finisher two years ago as Wales looked to recalibrate and trust more to hands. In came Gareth Anscombe, a New Zealander whose more detached demeanour contrasted with the up-and-at-’em approach of his rival. Wales, as they showed at Twickenham last week, no longer treat the ball as a coveted possession, guarding it closely.

They are prepared to offload, gamble and gambol, in contrast to the last World Cup when their lack of creativity first cost them top place in their group when they failed to score a try against Australia, even when the Wallabies were down to 14 men, and then in the quarter-final against South Africa when they were almost as wasteful.

Biggar was the outhalf, a supreme kicker of the ball and competitor who summed up the northern hemisphere zeitgeist then. It was why the former Wales and Lions wing JJ Williams remarked last week, after the knee injury Anscombe suffered at Twickenham ruled him out of the World Cup and beyond, that “we’ve said in the past that we are not going to win the World Cup with Dan Biggar in the team”.

Williams’s fear that the move was atavistic was understandable given that in the last couple of years Wales have become more flexible tactically, but Biggar spent last season at Northampton where the director of rugby, Chris Boyd, is turning a side renowned for its rigidity and one dimension into one that is reactive and more opportunistic.

Boyd worked with Beauden Barrett at the Hurricanes, and if Biggar is not one to extemporise in the flamboyant manner of the New Zealander, he has throughout his career proved able to adapt his game to the demands of coaches. Biggar struggled initially under Boyd’s sharp change of direction but he helped steer the Saints into the top four of the Premiership.

“Did he play 50 or so years ago?” Warren Gatland replied when asked about Williams’s remarks. “In the 1970s probably.”

Wales coaches have in the past tended to raise their eyes upwards when asked about the golden era of Welsh rugby, between 1969 and 1980, bracing themselves for an unflattering comparison, but in his Six Nations tenure between 2008 and this year, he equalled the three Grand Slams achieved then.

The gaze now is forward rather than back, but it will take the World Cup for Gatland’s Wales to stand above the rest. The bloody-mindedness that he engendered remains, together with the habit of giving everything, but it is the little extras that will count in Japan.

The victory over England ultimately came down to Biggar’s quick thinking as he prepared to kick a penalty to touch. Anthony Watson was walking to the sin-bin, but the outhalf spotted they were another man down with Ben Youngs waiting to replace Willi Heinz, who had gone off for a head injury assessment.

He sent a kick to the other side of the field. Josh Adams took possession and two phases later, Biggar was kicking to England’s unguarded left flank where George North scored. Perhaps four years ago, when Wales’ play was more proscriptive, he would have played safe and gone for the lineout.

It is the difference between winning and losing. Leigh Halfpenny, another mainstay in the last World Cup, showed on Saturday a relish for the counterattack that was once foreign to him.

Biggar, buoyed by Boyd, is a hardy perennial, and if Wales fail in the World Cup it will not be because he is back at number 10.