Gerry Thornley at the Shizuoka Stadium 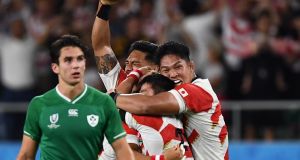 This was, for sure, some day for Japanese rugby and as an extension some day for the 2019 Rugby World Cup, but it was a deeply disappointing and damaging defeat for Ireland.

In the process, the Brave Blossoms blew Pool A wide open, and although Ireland secured a bonus point – which was the most their performance deserved – to win the group and, most likely, avoid the All Blacks in the quarter-finals, they now need Scotland to beat Japan, providing Japan fail to pick up bonus points from their remaining fixtures. But this is now a three-way tussle. Ireland need a handsome, 10-point return from their remaining games against Russia and Samoa.

But the feel good factor generated by the handsome win over Scotland has been largely eroded.

Credit to Japan. Roared on by the majority in a 47,813 crowd, they grew in strength and ambition and skills as the match wore on, and were merited winners.

Ireland had profound problems at the breakdown and will feel a huge grievance over the awful performance of referee Angus Gardner, losing the penalty count 9-6, with most of the damage done at ruck time. There Gardner was conned into giving Japan penalties when they held Irish players in, while allowing them all manner of largesse.

All that said and done, Ireland really struggled to resource rucks and affect clearouts, not helped by the manner in which they increasingly lost collisions.

Leading 12-3 after a strong first quarter, they stopped playing, began looking increasingly limited in attack and, akin to Twickenham, the legs seemed to go from them. Maybe it was the heat and humidity which compounded the six-day turnaround, as against Japan’s eight days, but as feared, there was also a different mental dynamic to this game compared to their respective openers.

Ireland’s defence missed 10 tackles in each half, compared to six last week, and their set-piece also crumbled to costly effect. A telling moment was the sight of the Japan pack steamrollering Ireland’s attacking put-in just past the half hour.

Before the game – the sizeable Irish contingent was perhaps slightly inflated by the empty seats being coloured green – each squad ended their warm-ups and the Brave Blossoms formed a human chain with an arm on the shoulder of the man in front or beside them.

Jack Conan was seen with his injured foot in a moon boot, furthering the sad likelihood that his World Cup might be ended prematurely, with Jordi Murphy removed from Ulster’s win over the Ospreys last night to be on standby.

Joe Schmidt also intimated strongly that Johnny Sexton will play in Ireland’s next game against Russia in Kobe on Thursday. “Johnny is likely to be involved in our next match,” Schmidt told ITV.

The stadium, which was built for the 2002 World Cup, and where Ronaldinho embarrassed David Seaman with a lucky lobbed goal which was surely meant as a cross, was packed to the rafters.

The biggest swathe of green was congregated behind the goal Ireland attacked in the first-half, with Jack Carty getting proceedings under way.

Initially, Carty was content to kick in behind Japan’s left-winger Lomano Lemeki, and as a result Ireland controlled the field position, with half a dozen lineouts inside the Japanese half in the first 25 minutes.

That said, Japan did manage one early flurry up-field after a turnover by Amanaki Mafi, who was so guilty of side entry it wasn’t funny. Even so, the bounce of the ball went with Ireland when Ryohei Yamanaka’s lovely grubber wickedly eluded the always dangerous Kotaro Matsushima, allowing Jacob Stockdale to complete a relieved touchdown. Peter O’Mahony was also penalised for going off his feet but Yu Tamura missed a straight pen from just outside the 10 metre line.

Reprieved, Ireland soon struck after O’Mahony won a penalty with the jackal when Chris Farrell wrestled prop Jiwon Koo to the ground. The Fields echoed around the ground. Ireland were turning down penalties at goal, and Carty crosskicked for Earls off one.

Garry Ringrose made a sensational start, and after finding Stockdale with a skip pass was on hand to collect the offload inside for Rob Kearney to deftly link with Josh van der Flier, before the crosskick tactic worked a treat.

Ringrose made the initial fend and break, before switching with Earls, and Furlong snaffled the loose offload. Three phases later Carty used a penalty advantage to cross kick deftly to the right wing, where Ringrose had stayed to time his run, jump and catch above Timothy Lafaele to perfection.

O’Mahony was pinged for offside for Tamura to open Japan’s account before Henderson and Best combined in a choke tackle for a turnover scrum. Again going to the corner, Farrell shaped to truck it up before pulling the ball back for Earls and Carty’s skip pass found Stockdale.

Six phases later, with another penalty advantage, Carty chipped high to the line and did brilliantly to extend his right arm and deflect the ball back for Kearney to gather and score, despite Mafi pushing back from the line. After a four-year, 26-test drought before the Wales game, Kearney had expressed the hope that tries might come along like busses, and so it came to pass.

Carty had two try-scoring assists and landed the conversion but Ireland soon had another reprieve when indebted to Josh van der Flier’s covering after Lafaele’s trademark one-handed offload out the back and lively scrum-half Yutaka Nagare sniped around the blindside and chipped ahead.

Murray also defended superbly when tracking and tackling Lafaele, but while the Irish lineout had yielded a seven from seven return, Best’s overthrow to Henderson proved costly when Murray was penalised for going off his feet and Tamura made it 6-12.

Japan lost their inspirational number 8 Amanaki Mafi with what seemed like a rib injury, but this meant the introduction of captain Michael Leitch to loud roars, and he gave their running game even more oomph.

Henderson made a good carry after Ryan latched onto turnover ball but an attacking Irish scrum crumbled. That was not a good look, and soon Tamura made it 9-12. By now chants of ‘Ja-pan’ to rhythmic clapping were getting louder.

The half ended with Carty’s worst moment of the half, his restart rolling into the in-goal area, and thus affording Japan a scrum on halfway and putting Ireland through a 15-phase defensive set which ended with the deftest of grubbers by dreadlocked hooker Shota Horie but it just eluded Limeki into touch.

The home players were quicker off the pitch, and Ireland needed half-time more. They’d scored the half’s only two tries but considering three tries eluded Japan, were ultimately grateful for a 12-9 lead. But this game was on a knife edge, and the home crowd’s support was now feverish.

Ireland couldn’t get a foothold in the third quarter, or when they did, they couldn’t make it stick. When Murray was caught in a ruck inside the Japanese 22, no-one was on hand to resource the ball and Japan came through for a turnover. Even when the Irish scrum dismantled the Japanese pack to earn a penalty, with David Kiloyne on for Cian Healy and Andrew Porter temporarily replacing Tadhg Furlong, Ryan was beaten in the air to Best’s throw when they went up the line.

Japan were winning the vast majority of the collisions and when Ireland couldn’t secure ball from a defensive scrum there was an inevitability about what followed next.

From Japan’s put-in, Ryoto Nakamura charged up the middle and three phases later they outflanked the Irish defence slickly with Nakamura’s long pass flicked on by Lafaele for Kenki Fukuoka, a late call up to the bench, to score. Tamura even laded the touchline conversion.

When Ireland began to generate some momentum after Earls tapped down Carbery’s crosskick and Kearney latched onto the ball, they were still struggling to resource rucks and clear the ball, before Murray’s no-look pass went forward.

Instead, Gardner was lightening quick when the Irish defensive line stepped forward and then back when sub scrum-half Fumiaki Tanaka briefly played the ball, and Tamura made it 19-12.

Ireland’s hopes all but evaporated when a 14-phase attack came to nothing as they went out the back and Jordan Larmour’s pass was picked off by Fukuoka. Although he was chased down by Earls and Larmour, Earls fumbled in trying to affect a difficult turnover, thus giving Japan a five metre scrum under the posts.

Matsushima was hauled down and Isileli Nakajima knocked on from the recycle. Joey Carbery found touch but the gong had already sounded. In mitigation, he may not have heard it above the deafening din, and Ireland were in no state to go the length of the pitch and earn a draw.

A losing bonus point was all they had to show for their efforts, and all they deserved too.