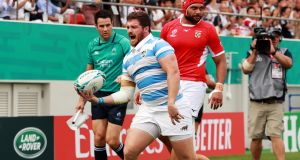 Argentina bounced back from their opening-round defeat to France with a 28-12 victory over Tonga in Osaka.

Two early tries from hooker Julian Montoya, both converted by Benjamin Urdapilleta, put the Pumas 14-0 in front after 18 minutes of the Pool C clash.

Argentina were gifted a third try shortly afterwards as Tonga failed to pick up a loose ball and centre Santiago Carreras raced clear for his first try for his country. Urdapilleta had a simple conversion underneath the posts.

The TMO ruled Urdapilleta came up short of the line after 24 minutes, but Montoya ploughed over to complete his hat-trick moments later, earning Argentina a bonus point as they made it 28-0.

Tonga got on the board before the break as Leicester Tigers winger Telusa Veainu broke through following some patient build-up play and Sonatane Takulua converted.

David Halaifonua was denied a second try by the TMO before the break as Tonga went in 28-7 down.

The second half was a much tighter affair, with superb defence from Takulua preventing Tomas Cubelli from scrambling over a fifth try.

Tonga scored the only try of the second half, with Veainu going over again after great strength from Cooper Vuna. Takulua’s conversion made it 28-12, and that was how it stayed.