England put 10 tries past Italy to keep up momentum

Pool B round-up: USA claim second win as they shut out Spain 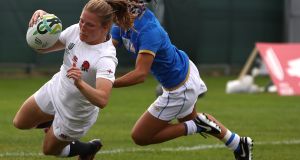 Having scored 10 tries against Spain, England repeated the trick at Belfield on Sunday, outclassing an Italian outfit who have given them problems in the past.

It was not perfect – too many handling errors and an indifferent scrum will not have gone unnoticed by the head coach, Simon Middleton – but it was a case of mission accomplished for England, who are cruising towards the semi-finals. Next up they face the USA on Thursday, perhaps their hardest pool stage match but another they will be expected to come through, and Middleton has now blooded 27 of his 28-strong squad in Ireland.

Against Spain Kay Wilson was the tormentor-in-chief, contributing four tries and duly earning herself the weekend off – Amy Wilson-Hardy coming in on the left wing and twice going close in the early stages. Scarratt, restored to the starting line-up, struck first however, going over in the right-hand corner after a cleverly delayed pass from Izzy Noel-Smith.

Alex Matthews – running a perfect line up the middle – notched the second try, scooting in under the posts but the first cracks appeared when Veronica Schiavon slotted a penalty for Italy and Maria Magatti finished off a sharp move down Italy’s right.

England have used their driving maul sparingly so far but it proved effective in setting up Lydia Thompson’s score before half-time and Amy Cokayne was on hand to score a fourth before the half-time interval after an eye-catching run from the impressive flanker Marlie Packer.

Tamara Taylor strolled over shortly after the restart – Scarratt swiftly followed suit – but Italy had a second try when Elisa Giordano squeezed over following a powerful driving maul. Waterman helped herself to a quickfire double before Thompson scored her 30th England try and Wilson-Hardy finally got her name on the scoresheet late on to give England the same points total they scored against Spain.

The Americans, 24-12 winners against Italy in Wednesday’s opening match, touched down six times and were awarded a penalty try, but were made to fight hard before breaking Spain’s stubborn resistance.

USA flanker Sarah Parsons ended the first half in the sin-bin for stopping a Spain attack without trying to play the ball and after finally breaking Spain’s spirited second-half defence, full-back Cheta Emba and Tapper both went over.

A penalty try after Spain had collapsed a driving maul made it 31-0 before substitutes JJ Javelet and Hope Rogers scored tries in the closing stages. Kelter was successful with two of six conversion attempts.