Victorious Ireland are cool, calm and collected against a woeful Springbok side 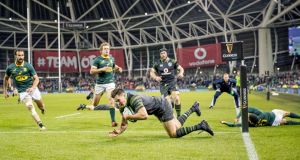 Out of action more often than not these past two years and it showed. Jumped for high balls only to land empty handed. Failed to mop up possession on 38 minutes when better scavengers than these sorry Springboks would have profited. Penalised on the ground for carrying into heavy traffic. Rating: 5

Camouflaged jersey allowed him snatch ball and coast for first international try. As a teenager this winger showed uncontainable potential on his Leinster debut. Now 26 and of Munster, he’s fast becoming a cerebral Joe Schmidt winger. Tidy up his kicking and aerial play and he stays in team. Rating: 7

Epitomised collective work ethic and clearly enjoys life at outside centre but it looks like Schmidt might be right: 12 is his natural position. But what to do when Garry Ringrose returns? Ridiculously, handling errors may put his starting berth under pressure come the Six Nations. Rating: 7

Welcome aboard. Nearing the finished article, and unquestionably an international calibre inside centre, he broke the Springboks tighthead prop Coenie Oosthuyzen in the opening collision. Belted into Siya Kolisi and stopped Damian de Allende then Francois Louw behind the gainline. Rating: 8

Great try on home debut. The man and ball smash on Dillyn Leyds provided a glimpse into the next decade with this powerful Ulster man. Nice piece of fielding and gathering on 56 minutes got him into a game that went largely down the other wing. Worth a look at 15 against Fiji. Rating: 8

The rhythm section hummed to its conductor’s will. Owned the ball, put it wherever he liked, missed the conversion of Conway’s try in the right corner but built a tidy lead with three first half penalties. Ran off the pitch in fine fettle on 75 minutes - an indictment of these Springboks in itself - to give Joey Carbery a look. Rating: 7

An hour plus change to convince Schmidt, Simon Easterby and Greg Feek that this old number one can be the first name on the team sheet once again. Thirty minutes seems to suit his explosiveness but the battle with Jack McGrath and Dave Kilcoyne is roaring again. Rating: 7

The captain’s role played with a calmness that forced referee Ben O’Keeffe to inform Sexton at one stage, ‘I already told Rory the reason why.’ Excellent turnover on 65 minutes swayed the contest deep into Springbok territory. There ended his 66 minute shift. Rating: 7

Ran over Lood de Jager then Eben Etzebeth as he brought his destructive capabilities back home from the Lions tour. The best lock in Ireland, Henderson has positioned himself for a top tier national contract. Rating: 8

Such is his double digit tackle count and structural importance he will need to be forcibly removed from this Ireland team. The hint came last March when discarded against England with James Ryan charged with growing into Toner’s sphere of influence. Some benchmark. Rating: 7

Backed up leadership speak mid-week with an all encompassing display. Superb out of touch, stealing or putting pressure on Malcolm Marx’s throw, while his secondary work at rucks cannot be overstated. Replaced due to punishment and the need to reward Rhys Ruddock’s provincial form. Rating: 8

Fourteen tackles and he’s only tuning up. Made a new pal in Malcolm Marx. Cut from the same slab of granite the pair of them broke even in their wincing meetings on the gainline. Constantly delving disruptive paws into South African rucks. Rating: 8

Loved the attention, relished every shoulder from Francois Louw and the other Springbok backrowers - of whom not one could honestly claim to be a superior player as this “small” South African number eight topped his day with a perfect turnover on 31 minutes to deny his fellow country men their best try scoring opportunity. Rating: 8

Rhys Ruddock arrived on 50 minutes and wasted little time securing a clean turnover penalty (two more inches and he’d be the starting lock). His superb try on 70 minutes killed the contest. Rob Herring scored against his own country. Rating: 7

The game plan was clean, efficient and full of clever launch plays. The opposition was pathetic in their execution. Dark days for Springbok rugby. Progress by Schmidt and co. Rating: 8

Blackmore back among the winners at Fairyhouse 21:32
Elite athletes still required to undergo 10-day mandatory quarantine 20:32
Klopp says Liverpool need ‘perfect performance’ to overcome Real deficit 20:00
Grand National hero Rachael Blackmore on the mark at Fairyhouse 19:32
Solskjaer’s son has the appetite for a go at Mourinho 18:50
Crossword Get access to over 6,000 interactive crosswords