Ireland international available for Sunday’s game against the Southern Kings 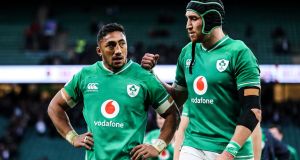 Ultan Dillane with Bundee Aki after the defeat to England at Twickenham. photograph: James Crombie/Inpho

Connacht have received a considerable boost for their trip to South Africa to take on the Southern Kings this weekend after Ireland internationals Ultan Dillane and David Heffernan were both released from Ireland camp to make the trip.

Secondrow Dillane moved on to the bench for last Sunday’s defeat to England at Twickenham after Iain Henderson dropped out of the team due to the birth of his son.Dillane played the last quarter of the game, coming on for Devin Toner. Hooker Heffernan has been part of the Ireland training squad.

Connacht take on the Southern Kings on Sunday at the Nelson Mandela Bay Stadium in Port Elizabeth, the game kicking off at 1pm Irish time.

The Irish provinces will then have two weekends off before te Pro 14 resumes on March 20th.