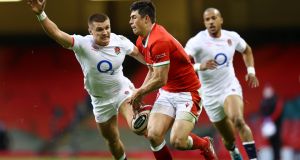 Louis Rees-Zammit of Wales knocks on during the Six Nations match against England at the Principality Stadium. Photograph: Michael Steele/Getty Images

A recent High Court judgment got me thinking. Anyone who sits on that exalted bench has a profound knowledge of the laws of the land, of precedents and of rulings – all are required to deliver safe and sound judgments.

Before that, of course, a potential judge will have studied intensely, had years of training, and passed much more than an exam or two on his way to the Law Library.

Study of judgments which come from the court demonstrates the experience and wisdom at play. Judges rarely err in law, so the training and education clearly pays dividends.

Referees are also required to make judgments, and it is notable that rugby union has laws, not rules.

But, from what we are seeing at the exalted level of the Six Nations (and other elite competitions) the water is muddy, with the necessary profound knowledge of rugby law clearly missing. And, I’ll hazard a guess, not too many exams have been passed recently.

It is all very well for Pascal Gaüzère to admit his errors (and that’s respected) the following day, but he and the other match officials needed to ensure the correct conclusion on the Saturday

Gaüzère will be miserable, but, while well supported by colleagues and World Rugby, he will not have had anything like the comradeship Billy Burns will have got following his miscues in Cardiff and Dublin. It’s a lonely place.

Referees are besotted by video clips of match incidents and they spend hours reviewing and debating these. And that is how they formulate decisions. I am not jesting.

These clips are very worthwhile, and have a place in the process. But to depend on “clip memory” without deep knowledge of the law is putting them at high risk when high-pressured decisions need to be made. And, even though the influence from the crowds are absent in this Six Nations, they have never before been under so much scrutiny and pressure.

In Rome, play was under way and a breakdown developed very close to the touchline. Referee Mathieu Raynal was standing with his back to that touchline, watching play develop. Things became scrappy, so over to “clip memory”.

But then he turned around to his assistant referee, seemingly to look for guidance. Again, I kid you not. The assistant was the young, inexperienced, Welshman Craig Evans. It would be akin to his Lordship asking for a junior counsel to point him in the right direction.

We’ve discussed the Cardiff knock-on, and know that only Louis Rees-Zammit could have made that okay, by gathering the ball before it hit the ground or any other player. I’m repeating that because some believe I’m wrong. Sorry, I am not, and neither is World Rugby. We rest our case.

In Rome, the disallowed Iain Henderson try was down to the TMO Romain Poite. The law is clear, it was a try. But Poite’s “clip memory” must have been skewed, and this is a referee who has over 70 Tests to his name.

The other major problem with video clips is that no two rugby incidents are precisely the same, leading to yet more misleading information. It’s not just happening on this side of the world, this has spread.

International referee Ben O’Keeffe failed to give a nailed-on yellow card to Crusaders prop Joe Moody in their fixture against a frustrated Highlanders. Moody pursued an opponent off the ball, smacking him several times to the face with an open-palm. It did not look good.

Maybe ‘open-palms’ hadn’t been specifically considered before, so maybe there were no specific clips available. But a full understanding of the relevant law would have seen a yellow as the minimum sentence.

At their subsequent referees’ review meeting, they agreed it was a yellow card decision. By a show of hands, a vote maybe? Later O’Keeffe was pleased to admit he was wrong. Admirable, well done, but I would have thought that’s a tad late, rugby deserves more.

All match officials need to take the field fully locked and loaded, with a clear plan in place which will meet every eventuality, even surprising ones. And knock-ons and touchdowns hardly come into the realm of surprising. The referee must be the team leader, and not be subservient to his support staff.

Otherwise, they are not managing the risks, and are increasing the potential for error.

And errors there have been, too many key decisions which have been just plain daft (and don’t forget these are the top men in this neck of the woods.) I am pretty certain that most of these errors would have seen correct decisions if a full understanding of the law existed.

What is needed is more pro-active decision making, and we are seeing renewed efforts, on the instruction of World Rugby, to maintain the 10-metre offside line at lineouts, and the space in front of the kicker. But where had these gone, why has it been necessary for World Rugby to point out that the maintenance of space is critical. “Clip memory” full?

We can be comforted by the new structure at World Rugby, and for those officials who don’t want to make serious efforts at risk management, I can tell them that there is not one word in the “Book of Laws” which is not known by Joël Jutge and Joe Schmidt. Improvement will be sought.

Referees should welcome it, and it will enable them to enjoy their role more, and not be in the limelight for all the wrong reasons. Too many seem, despite their efforts to appear of swan-like serenity, to be paddling furiously beneath the surface. And that can’t be comfortable.