Six Nations: Will Connors sets the backrow benchmark in Rome 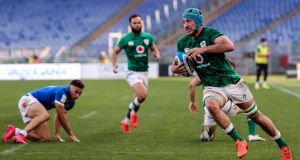 Will Connors strolls over for his first of two tries against Italy. Photograph: Tommy Dickson/Inpho

The marauding blue scrumcaps seemed omnipresent, treating the Stadio Olimpico as a personal fiefdom. At times, in the mass of bodies at the breakdown Will Connors and Tadhg Beirne were briefly indistinguishable, backs bent, hovering over a prone Italian, largely immovable objects.

Often captured in a single frame, they were rarely absent from the epicentre of the contest, a consistent scourge for the home side, chopping down and pilfering on one side of the ball, protecting, carrying and linking when Ireland had possession. Beirne even found time and space to stretch his legs and gallop down the touchline, a brief respite from more earthy duties.

He was awarded the man-of-the-match for his excellent contribution but it could just as easily have gone to his blue cap buddy, Connors. It’s not often that a player scores two tries and makes 14 tackles - the excellent James Ryan led the way with 19 - only to miss out on the bauble. Could it have been a case of mistaken identity?

It’s a spurious, tongue-in-cheek aside. Neither player will care unduly about a trinket of personal recognition; they couldn’t on the basis of the way in which they perform, putting the team first. Beirne relocated to the backrow, and Connors, chosen ahead of Josh van der Flier, vindicated the decisions of head coach Andy Farrell.

The 24-year-old Connors has now scored more tries, three, in eight Ireland caps than he has in 23 appearances for Leinster (two) but the challenge in Rome was to compile a compelling body of evidence, within the confines of team responsibilities, to retain the seven jersey for the game against Scotland in Murrayfield.

His ‘chop tackling’ is a calling card, a real strength but there is so much more to his game. In the first two minutes of the match, Connors was involved on four occasions, two clearouts and a member of a couple of gang tackles. It set the tone for the remainder of his performance; high energy, focused and effective.

Italy’s defensive malaise in the tournament is well documented and once again this was a bit of a horror show when it came to basic tackling but they had posed problems for both France and England with the ball in hand. There were flashes of that attacking nuance but Ireland shut them down far more effectively than either of their previous opponents in the tournament.

While Connors didn’t contribute to Ireland’s 20 ‘dominant tackles’ stats - Robbie Henshaw (eight), once again excellent, Ronan Kelleher (seven), powerful in the collisions and the excellent Ryan (five) contributed that tally - he did fell several Italian poplars close to the roots that anchored them to the turf.

Italian number eight Michele Lamaro and replacement prop Cherif Traore will vouch for the effectiveness of Connors’ tackling technique but the Irish flanker also demonstrated the qualities of those round bottomed toys that self right instantly after being pushed over. Connors pounced on the loose ball and flicked it away to his fellow blue cap, Beirne and on another occasion forced a penalty when working alongside Iain Henderson at another ruck.

Connors’ work in clearing out at the breakdown was evident in the build-up to Henderson’s try that wasn’t; a bizarre ruling by television match official, Romain Poite. He was the recipient of good work by his teammates, particularly Jordan Larmour that gave him a handy run-in for his first try on 35 minutes. It was hardly a coincidence that Connors and Beirne both cropped up on the wing on one or two occasions when Ireland had the ball.

Connors carried, cleared out and carried again in the build-up to CJ Stander’s try just after the resumption. It was representative of his multiple involvements during sequences of play, especially in attack. Animation is important in masquerading as a potential front-line carrier; he’s better than many of his colleagues in that respect.

He also found time to fill in as a scrumhalf on a couple of occasions, maintaining momentum and tempo to an attack. Connors’ second try on 65 minutes came against a depleted Italian side that had succumbed on the double to the yellow peril.

Part of a lineout maul that trundled towards the home side’s line, he spotted a chink of daylight and lunged through the hole, just as Craig Casey was about to set Plan B in motion. There was still time for him to employ a version of the Heimlich manoeuvre on Andrea Lovotti forcing the Italian prop to cough up possession in a tackle and then stopping Sebastian Negri dead.

It’s important for him to enjoy the performance but it now represents a benchmark for Connors and the next challenge will be to replicate it, in tone and pitch, in Edinburgh.